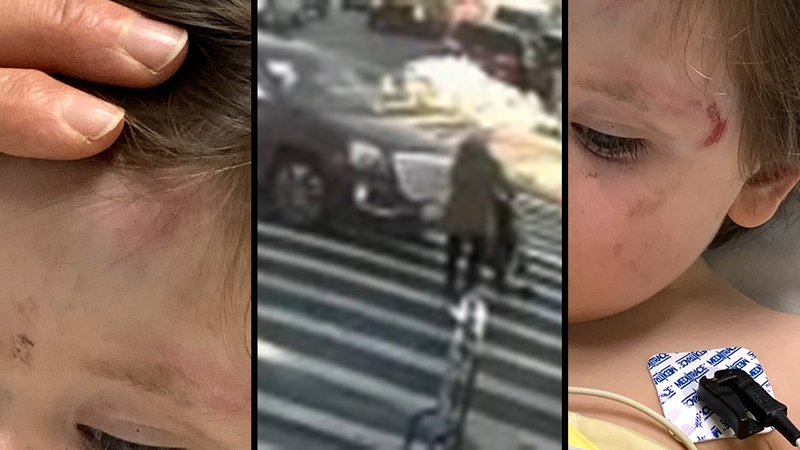 Driver flees after plowing into grandmother, boy in stroller

PELHAM GARDENS, Bronx (WABC) -- Police are searching for the driver who took off after hitting a woman and young child in a stroller in the Bronx.

It happened around 2:20 p.m. at Mace Avenue and Eastchester Road in Pelham Gardens, where the pair was walking in the marked crosswalk with the light in their favor.

Video showed the driver get out of his red GMC Terrain Denali after the crash and survey the scene, but he left before police arrived.

The toddler was treated for a cut to his head, while his grandmother suffered a bruised leg but refused medical attention.

The boy's father provided Eyewitness News with a picture of his son's injuries.

"He didn't make any attempt to stop and try to do the right thing, like any other human being would've done," Erlon Kola said. "And I'm just really shocked and obviously disappointed by that, but in the meantime, I'm just glad my son is still here with me, so that's all that matters.'

He said both his mother-in-law and his son are sore but will recover. They did not spend the night in the hospital.

The grandmother was babysitting while the father went Christmas shopping, and he was in the area when he got a call from his mother-in-law.

He rushed to the scene and saw them in the ambulance. His wife is a nurse practitioner at the hospital, and she met them in the ER.

He says his son's 3rd birthday is Christmas Eve.

ALSO READ: Winter weather forecast for the Tri-State area; Will there be a white Christmas?