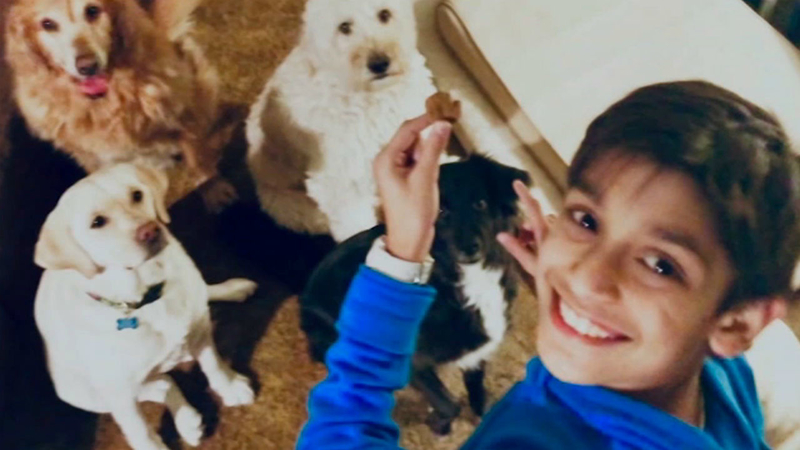 UNION, New Jersey (WABC) -- The mother of a 12-year-old boy killed in a hit-and-run crash last week is speaking out for the first time and pleading for the public's help to find the driver.

Jeremy Maraj was struck last Wednesday on Forest Drive near Galloping Hill Road just before 8 p.m. He passed away from his injuries two days later.

In an exclusive conversation with Eyewitness News on Tuesday, his mother said that he was on his way home when he was struck last week. He had just left a park directly across the street from his home.

"The grandfather was there waiting at the corner...and they both were looking to see when it was safe for him to cross," his mother Lisa Jamurath said. "He just saw the vehicle went past him and still continued looking ahead and he didn't see Jeremy anymore."

The 7th-grader saved four lives after his death when his family donated his heart, kidney, liver and pancreas.

"He saved four people Saturday, four people. And one of them was a little boy," Jamurath said. "Donating organs for your child is very hard, your baby especially. But but it wasn't a hard decision in terms of knowing his demise could be someone else a second chance."

"I want justice. Why did you leave? It's a child, it's daylight, you saw it was a child that you hit, you shouldn't have left," she said.

Police said last Thursday afternoon that they identified the driver of the van that struck Maraj thanks to the driver's employer.

"He then became suspicious and decided to Google if there was any occurrences and from that he determined that he saw something on Google that basically led him to call us here this morning," Lt. Victor Correia said last week. "We then responded to the location and then we were able to retrieve the van."

Despite the owner of the van coming forward, no arrests have been made.

A wake is planned for Thursday for the public -- including friends and classmates. But a private funeral will be held Friday so his family has their final time with him alone.

The Union County Crime Stoppers are offering a reward of up to $10,000 for information leading to an arrest and indictment in this case; tips can be given anonymously by phone at 908-654-TIPS (8477) or online at www.uctip.org.