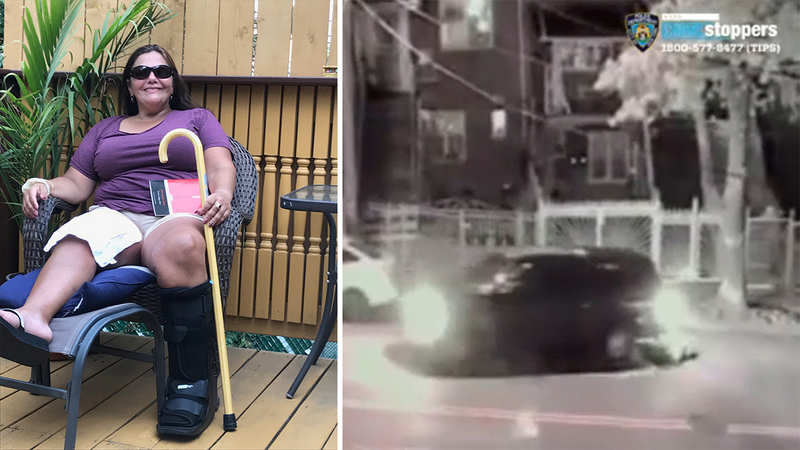 BRONX (WABC) -- Police in the Bronx are searching for the driver who backed over a woman and left her lying injured in the street.

The victim, identified as Lisbeth Arce, suffered injuries to her legs and ankles and remains at NYC Health & Hospitals/Jacobi in stable condition.

"I was told that she was going to be only a couple of days, but then it was so bad that they will have to keep her here," her husband, Raul Gonzalez, said.

Arce was trying to cross Pitman Avenue when a dark-colored pickup truck reversed and hit her. She had just left the house her mother had lived in.

The vehicle then drove off. Police note that the vehicle did have an after-market cap installed on the truck bed.

"He hit her on the back, knock her down, and run her over, twice actually," Gonzalez said. "He pulled up and ran her over again and left her there. He didn't stop. It's very traumatic."

She was initially released from the hospital after a few days but developed an infection. Since then, she has had six surgeries but hopes to be out soon.

"It's been hard, you know, but we are keeping our hopes up," Gonzalez said. "Hopefully, you know, we will put this behind us and the person who did it gets caught."

In perhaps an odd twist of circumstances, Arce's mother, 82-year-old Hilda Arocho, was struck and killed by a hit-and-run driver two years ago close to the same spot where Arce was struck.

The driver in that case fled but was later arrested and charged.

"This is ridiculous, this is a death street here," neighbor Barry Roberts said. "And we are not getting any kind of help."