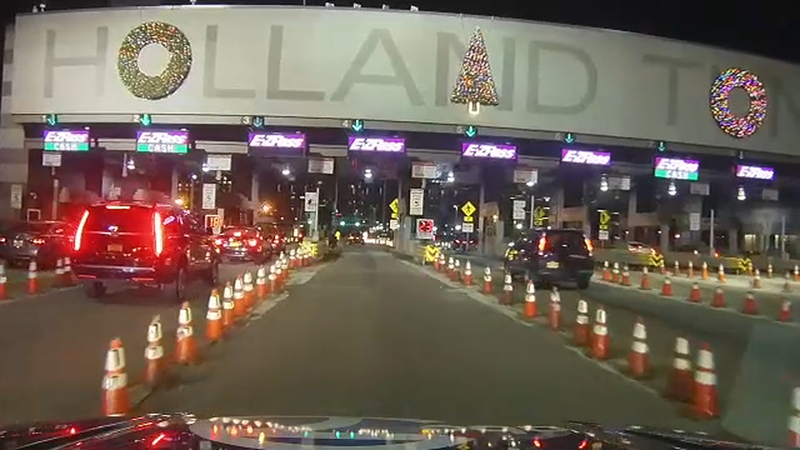 JERSEY CITY, New Jersey (WABC) -- The Port Authority is giving the public a chance to weigh in on the debate over holiday decorations at the Holland Tunnel entrance on the New Jersey side.

The agency held a public hearing Thursday and also is conducting a poll on what to do with the decorations.

On a day when the Port Authority approved an $8.5 billion budget and celebrated record traffic at its ports and airports in 2018, most of the questions after its monthly board meeting focused on the decorations.

Cory Windelspecht, the Manhattan man who has been the public face of the push to move the decorations, addressed the board.

"The only reason we are here today is that we spoke loudly," he told board members. "We just wanted to get noticed."

Windelspecht said he travels through the tunnel several times a week as part of his job in medical sales and that he has been irked by the sign for several years because of the placement of the tree decoration over the "N."

This year he called the Port Authority but got nowhere, until a video he made about the situation went viral.

At the hearing, Cory read complaints from some of the 2,000 plus commuters who signed his petition asking for a change.

"Just move it, it's not right," he said. "It hurts my brain. It's a distraction and distractions are anti-traffic."

His petition asked officials to change the location of the Christmas tree to go over the 'A' in Holland.

Right now wreaths cover the 'O' and 'U,' with the tree hanging in the middle over the 'N'.

He wouldn't give details but said, based on results so far, "change is in the air."

"In light of the interest and in light of the proposal for change, we thought it was important to listen and take action, and what we're doing is quite straightforward," Cotton said. "We intend to act based on the results."

Cotton added that a design competition would be considered for next year.

More than a million vehicles per month use the tunnel to downtown Manhattan, according to Port Authority statistics.