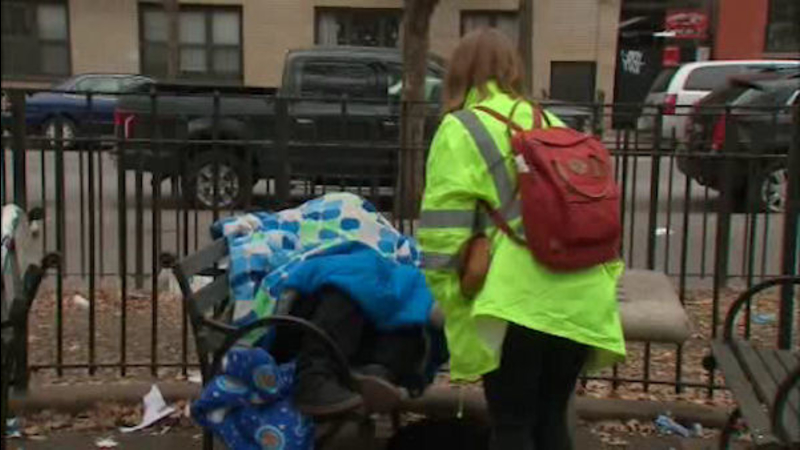 Homeless outreach teams fan out across NYC for first time

NEW YORK CITY -- Members of New York City's homeless outreach team fanned out for the first time Monday to try to get people off the streets.

It is part of Mayor Bill de Blasio's new effort in trying to solve the city's growing homeless problem, with teams trying to convince the homeless to stop sleeping on the street.

Melissa Bishop, who says she is banned from female shelters, is an example of just how difficult solving the problem has become.

"I have been street homeless since I was 12," she said. "My father kicked me out when I was young. I've been out here for a long time."

This summer, police began dismantling homeless encampments across the city. But that has infuriated many homeless, who protested Monday near City Hall and accused the mayor and police of destroying what little they have.

"And taking all my belongings, all my property, everything I have and throwing it away in a dumpster," Floyd Parks said. "Had it crushed up."

But the mayor defended his plan and his actions.

"It was the right thing to do," de Blasio said. "We're not going to allow encampments to re-assert. We're just not going to tolerate it."

"This is a combination of tools that has never been tried before on this scale in this city, not even close," he said. "It will not happen overnight, but I'm convinced it will work."

Many New Yorkers expressed optimism that it will.

"Any kind of outreach is super helpful," Greenwich Village resident Beth Radelce said. "So hopefully it will do some good."

About 50 members of three nonprofits are talking to some of the 55,000 homeless as part of the outreach program.

Meanwhile, three homeless New Yorkers filed paperwork to sue, saying police woke them up from their encampment and then tossed a birth certificate, Social Security cards, priceless family photos and other belongings into a dump truck. They complain that the outreach programs are too aggressive.