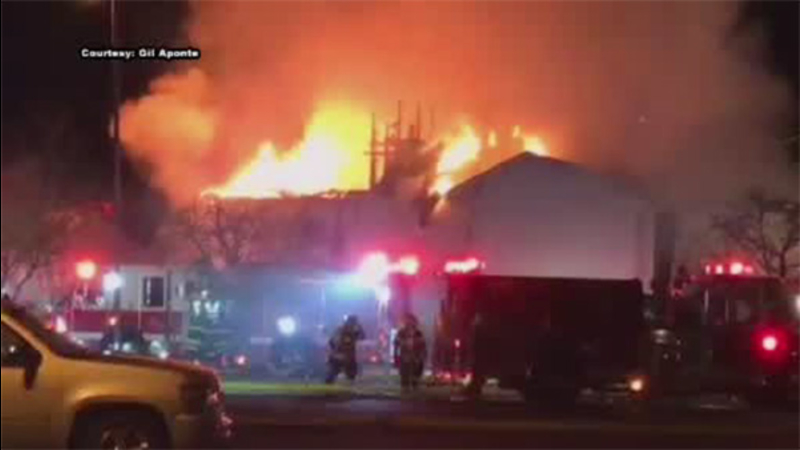 Large flames were showing from the roof when crews arrived.

It took firefighters over two and a half hours to get the blaze under control.

The fire appeared to be concentrated on the second floor. The flames traveled above in an attic space and throughout the hallways.

Occupants were attempting to jump and had to be rescued.

The Vineland Fire Chief, Robert Pagnini said, "They were hanging out of windows and throwing their belongings out the windows..."

Firefighters realized they were in for a tough fight and called in for extra help from the surrounding areas.
Officials say there are one hundred rooms in the hotel, and all the guests are accounted for.

One guest visiting from Dublin, Ireland spoke to Action News about the scary moments when he left the hotel.

"My door gets knocked down, I open the door, it was the police telling us to get out, get out," said Brendan O'Mera.

O'Mera says his passport was left in the room.

Two people were injured, including a police officer.

The police officer was taken to the hospital with smoke inhalation. The officer is expected to be okay.

The other injured person was taken to a Vineland Hospital, but is being transferred to Crozer Chester Medical Center for burns and smoke inhalation.

Officials believe the fire may have started in this person's room.