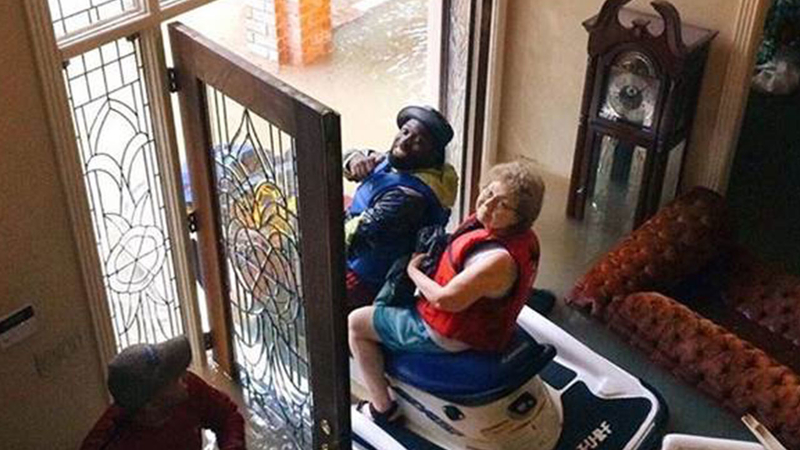 HOUSTON -- It's a photo that shows a light-hearted moment during the rescue operations in Houston: a grandmother sitting on a Jet Ski under her front door with quite the expression on her face.

Karen Spencer said it was one part "oh well, here we go!," one part "happy to be alive" and two parts, "I can't believe I'm leaving my flooded house in a Jet Ski."

She and her husband are hoping to find the mystery Jet Ski-operators to say thank you. Without them, they would have had to leave many of their possessions behind.

The Spencers, who live in the Ponderosa subdivision of north Houston, told ABC News that the first couple of days of Harvey were not bad for them. On Monday, though, their home began quickly filling with water.

Karen's husband, J.C., called their local Chick-fil-A, where they are regulars. He placed an order for two grilled chicken burritos, with extra egg, and a boat. The manager there called her husband, who has a boat.

When help arrived, the Spencers were forced to choose which possessions they wanted to bring with them in the boat. That is, until their Jet Ski heroes showed up and offered to transport the Spencers, freeing up space in the boat. 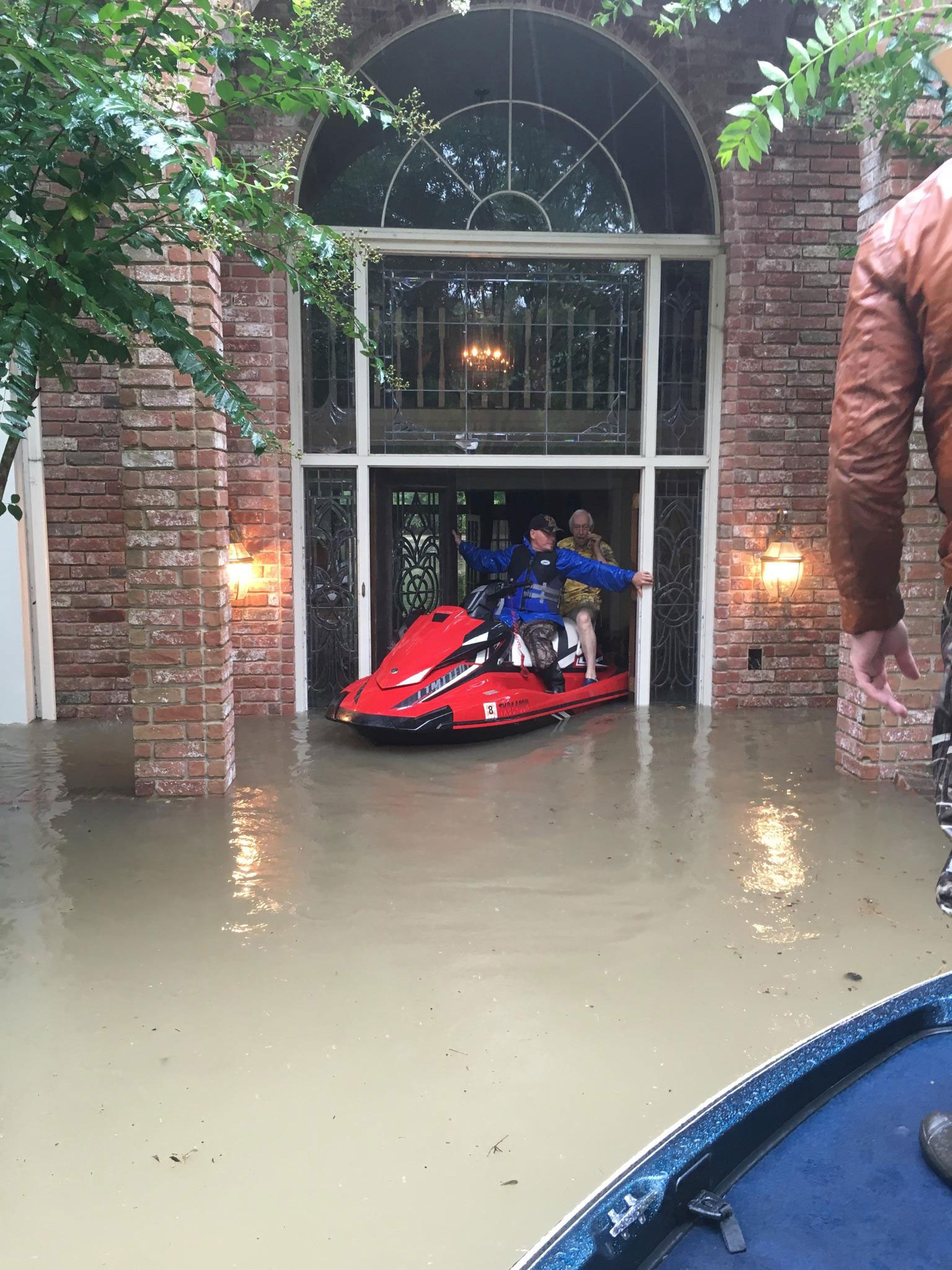 J.C. Spencer exits his flooded house on a Jet Ski.

After all that, J.C. wound up making a trip back to his flooded home to retrieve his wallet and wedding ring.

"I couldn't save my house but I have to save my marriage," he joked.

And as if the story behind the photo wasn't wild enough already, they say the couch seen near the front door floated in from another room.

How to help the victims of Hurricane Harvey
Text the word HARVEY to 90999 to make a $10 donation through the Red Cross. You can also visit redcross.org or call 1-800-RED CROSS.
Report a correction or typo
Related topics:
weatherrescuephotoshurricane harveyhouston floodsenior citizenshurricane
Copyright © 2022 WABC-TV. All Rights Reserved.
RELATED
Rescuers help save 21 dogs during Hurricane Harvey
Human chain helps rescue Houston woman in labor
Hurricane Harvey heroes
What to do if you're returning to a flooded home
HURRICANE HARVEY
What to keep and what to toss in a power outage
Mattress Mack gives $10K in furniture to disabled veteran
How Florence stacks up to other historic hurricanes
Deadliest, costliest hurricanes of the past 38 years
TOP STORIES
EMT shot in the back of an ambulance by drunk patient
9-year-old girl killed in NYC had bed dropped on head, prosecutors say
Bear safely removed after getting stuck in tree in NJ
AccuWeather Alert: Wet start and a sunny afternoon
20-year-old shot to death after motorcycle sale gone bad in NYC
Biden invokes Defense Production Act for formula shortage
Family mourns 18-year-old killed in Jersey shore sand collapse
Show More
Actor Liev Schreiber hosts event in D.C. to raise money for Ukraine
2 sets of twins graduate high school as valedictorian and salutatorian
Man arrested, charged in brutal murder of Queens pawn shop owner
African Americans experiencing trauma after Buffalo shooting
NYC mayor firm against mask mandates despite 'high' COVID alert
More TOP STORIES News