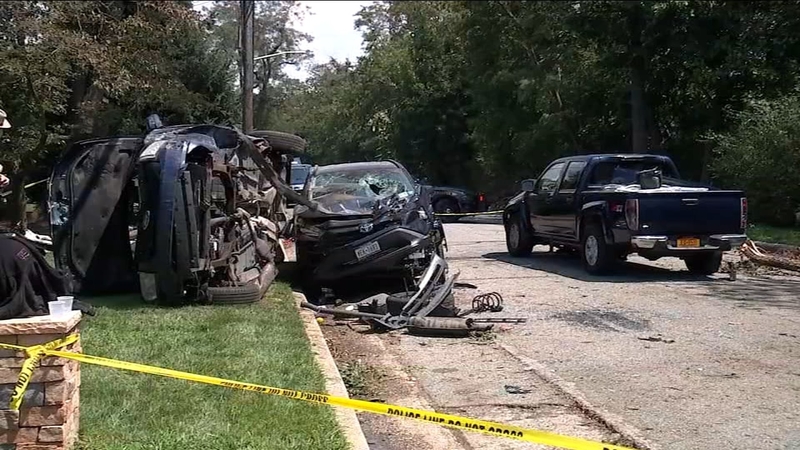 NORTH BELLMORE, Long Island (WABC) -- A vehicle with three adults and a baby flew off the road, plowed through a barrier and crashed into two other cars on Long Island Sunday morning.

On one side of Old Britton Road in North Bellmore are homes while on the other side is the busy Southern State Parkway.

After the crash, the mangled SUV and other items were left scattered all over a lawn.

He was home around 10:45 a.m. and ran outside after hearing the crash.

"It flew out of the Southern State... the car flew over, landed and the pick-up truck greeted them," Cervantes said.

Video from Cervantes' security camera shows the SUV bursting out of the barrier, slamming first into the pick-up truck traveling down Old Britton Road, and then hitting a parked car.

A vehicle with three adults and a baby flew off the road on Long Island and through a barrier. Police are trying to find out how it all happened.

"Everything was so quick, it came super quick," Cervantes adds.

He then realized there were people trapped inside, including a baby boy.

"The baby looked about 2-3 months," Cervantes said. "He was small, he was lodged in the back of the seat."

Also inside the vehicle were a woman and two men, one of them in hysterics and shock, cradling the child while pinned in the back of the vehicle.

"He was saying he couldn't breathe, his ribs hurt, his legs hurt. He was more focused on the baby," Cervantes said.

At first, the little boy wasn't responding, but then there was a sigh of relief.

Officials say three people were injured after a car lost control and jumped a curb on Hillside Avenue in Jamaica around 10 a.m.

"The baby wasn't even crying. When the mother mentioned there was a baby in the car, maybe it recognized her voice and snapped out of it," Cervantes said.

As crews arrived, they cut open the roof to get the trapped man out, and then attended to the others.

Cervantes says he is counting his blessings.

"If the car wasn't there, it probably would've kept rolling over," Cervantes said, and ended up in his front yard or possibly even his home.

All four people in the SUV, including the infant were injured, one of them seriously, police said.

They were all taken to the hospital.

Two people that were in the pickup truck they ran into suffered minor injuries.

The parked car was unattended at the time of the crash.

The rescue was caught on camera in Burlington Township, NJ.