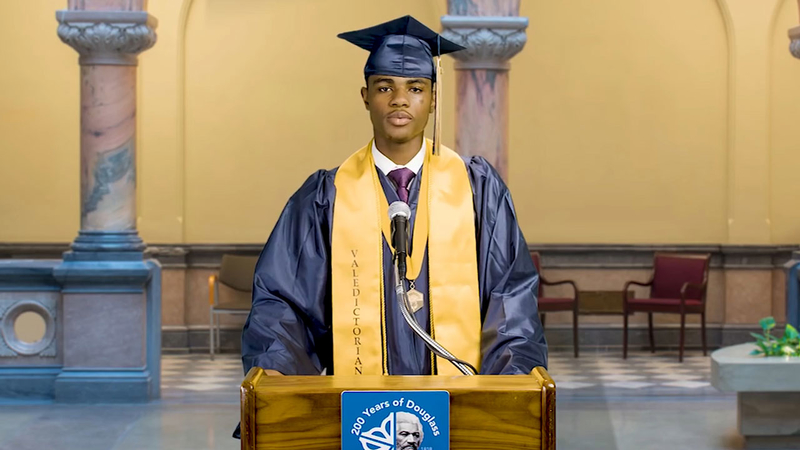 ROCHESTER, N.Y. -- After a school in Rochester, New York, did not allow its first black valedictorian to speak at graduation, the city's mayor responded by giving the student a chance to give the speech anyway.

Instead of giving a speech in front of his classmates from University Preparatory Charter School for Young Men on his big day, Jaisaan Lovett gave his speech in a video posted to Mayor Lovely A. Warren's social media accounts.

"Jaisaan will never graduate from high school again. He will never get that moment back," Warren said when introducing Lovett.

Lovett, who will be attending Clark Atlanta University in the fall with a full academic scholarship, is an intern in Warren's office, the Democrat & Chronicle reports. He told the paper that the school did not offer him a chance to speak as past valedictorians had. He asked about giving a speech anyway, Lovett said, and was told no without being given a reason.

He began his speech by acknowledging that he was the first black valedictorian of the all-male charter school.

"Hopefully there will be many more after me, and I want it to be known that this isn't impossible and it can be done," he said.

He then thanked every member of his family, beginning with his mom.

"Whenever I got in trouble at school, I got in trouble at home," he recalled. "And I guess looking back, I can appreciate that because it taught me actions have consequences. If she wasn't like that, then I probably wouldn't be giving this speech right now."

After wishing his classmates well, Lovett addressed his relationship with the school, saying that he considered not giving his speech.

"I wasn't going to give this speech at all. But then I realized something. I realized that this speech is about more than just me. It means a lot to everybody that I mean a lot to," he said.

Lovett finished with a message directly for the school's president, Joseph Munno.

Lovett had multiple run-ins with Munno since coming to the school in seventh grade, he told the Democrat & Chronicle. He said he led other students in a five-day strike demanding that the school order proper safety equipment for a lab.

"After all these years, all this anger I had towards you and UPrep as a whole, I realized I have to let that go in order to better myself," he said in his speech. "And I forgive you for everything I held against you."

The school responded to the controversy with a message on its Facebook page stating that the situation was under review by the school board.