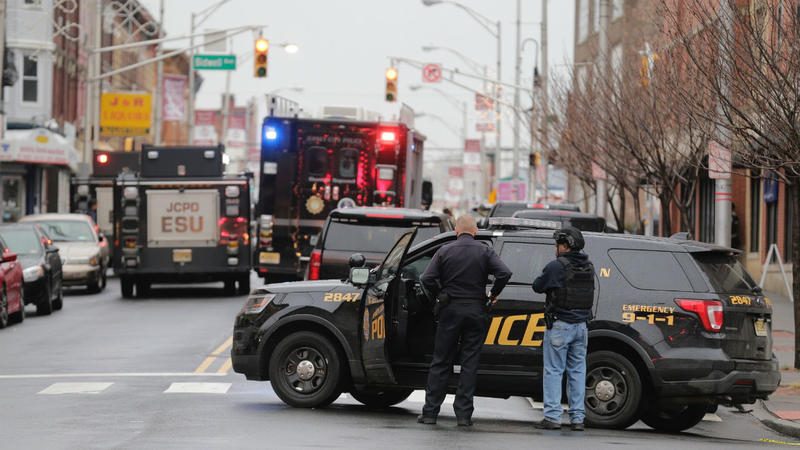 JERSEY CITY, New Jersey (WABC) -- A multi-agency investigation is underway after one police officer was killed, two others wounded, and five people were found dead inside a grocery store following a wild shootout and standoff in Jersey City Tuesday afternoon.

Crime scene investigators were still out Wednesday morning working to piece together exactly what unfolded, as cameras got the first look inside the store where the hours-long incident ended.

The slain officer, who has been identified as Detective Joseph Seals, was a 13-year veteran, husband, and father of five.

"It's a really tough day for the city of Jersey City," Mayor Steven Fulop said. "Even more than being a police officer that loved Jersey City, that was probably responsible for or one of the leading officers for the most guns getting off the street, from what I understand, he was also a husband and a father of five children."

Authorities say the incident started at Bay View Cemetery just after noon, with Seals, 40, fatally shot and a second officer wounded in the shoulder, and was possibly related to a drug or gun deal gone bad.

They say two men dressed in black then fled in a stolen U-Haul to the area of JC Kosher Supermarket on Martin Luther King Drive, where they continued firing at responding officers.

Police retreated and took up defensive positions, and hundreds of officers, SWAT units, and the Bureau of Alcohol, Tobacco, Firearms and Explosives descended on the scene.

RELATED: The scene on the streets of Jersey City captured in video and photos

The massive response included resources from neighboring municipalities, as well as the FBI.

Officials said the two suspects were neutralized, and a robot was sent inside the store with officers following behind. There, they found the bodies of who they believed were three civilians and the two suspects.

Police said they were confident the bystanders were shot by the gunmen and not by police.
EMBED More News Videos

Our hearts break for the family of the fallen @jcpolicedept officer and for the entire law enforcement family. Today's tragic events serve as a stark reminder of how our brave first responders stand ready to run to danger at a moment's notice to keep us safe. https://t.co/tDyOHxY4TB

Fulop said in a tweet that the initial investigation indicates the suspects targeted the market that was the scene of the assault.

"Due to an excess of caution the community may see additional police resources in the days/weeks ahead," said Fulop. "We have no indication there are any further threats."

Law enforcement sources say it was not just a drug deal involved in the incident as initially suspected, but Det. Seals may have been interested in the two suspects who ultimately shot and killed him because of a weekend homicide.

Police in Bayonne found a Jersey City man, identified as Michael Rumberger, in the trunk of a Lincoln Town Car on Saturday night. The crime had not been immediately solved.

All Jersey City schools were placed on lockdown, which lasted for several hours, as was New Jersey City University.

Officials said all of the city's 30,000 students in 43 schools were safe and accounted for, despite having to listen to hours of gunfire, and a systematic release began at 4;15 p.m.

For parents: We still have an active scene but all the schools in the area are secure and all children are accounted for. We will provide more information later.

Heavy gunfire could be heard for over an hour in what appeared to be an intense gun battle with the suspect or suspects, but the gunshots subsided around 2 p.m.
Police started slowly moving towards the store and clearing innocent people off the street, and then more shots were fired.

There is at least one survivor from the business being treated and talking to police. That person told them there were as many as four other people inside at the time the shooting occurred.

Authorities also say this appears to have started as criminal activity and that there is no nexus to terrorism. Still, White House spokesman Hogan Gidley said President Donald Trump had been briefed on the shooting and was monitoring it.

"Our thoughts and prayers are with the men and women of the Jersey City Police Department, especially with the officers shot during this standoff, and with the residents and schoolchildren currently under lockdown," New Jersey Governor Phil Murphy said. "I have every confidence in our law enforcement professionals to ensure the safety of the community and resolve this situation. Today reminds us of their bravery and the sacrifices they, and their families, make for our communities."

New York City Mayor Bill de Blasio announced extra protection in the Jewish community in the aftermath of the incident.

"Although there is no credible or specific threat directed against New York City, I have directed the NYPD to assume a state of high alert," said the mayor. "Tonight, NYPD assets are being redeployed to protect key locations in the Jewish community. Tomorrow, we will announce additional measures.

"The NYPD is closely monitoring the ongoing situation in Jersey City, and we stand ready to assist in any way we can," New York City Mayor Bill de Blasio said. "Please keep our neighbors in Jersey City in your thoughts today, especially the brave officers and first responders going into harm's way to protect lives."