Teen burned as baby in campfire has life-changing surgery 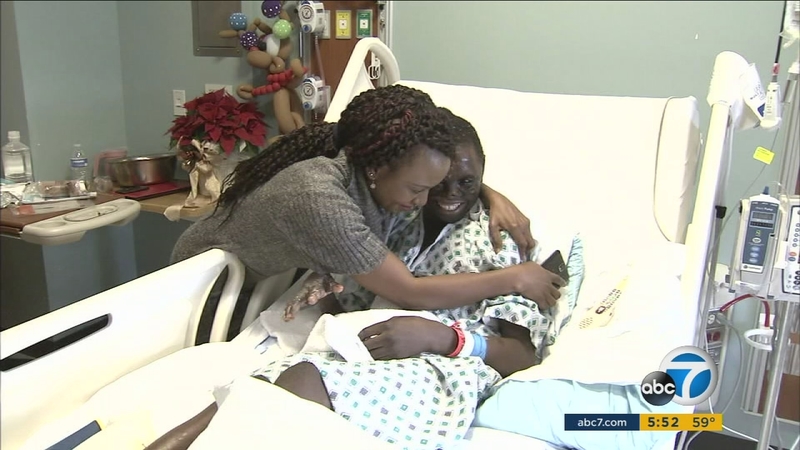 Teen burned as baby in campfire has life-changing surgery

TORRANCE, Calif. -- It was a day of anticipation for a 16-year-old burn victim from Central Africa.

Jespa Awomah suffered severe burns in his village in Cameroon after falling into a campfire used to cook family meals when he was just a 10-month-old baby.

The burns fused his forearm, hand and fingers together in a backward, contorted motion. One of his eyelids was burned off and he only had partial use of the other eyelid.

Since he was a baby, he has been unable to close his eyes. For 15 years, his eyes have wept continuously to keep them from drying out and he learned to sleep with his eyes open.

After multiple surgeries, Jespa is seeing and feeling progress.

On Monday, Jespa got a first look at his new fingers and a rebuilt eyelid from the Torrance Memorial's Burn Center.

"They have done a miracle on me, a miracle," Jespa exclaimed. "Now I can do things with my hand."

"I can play ball, basketball, any sport," he said.

A non-profit called Plant A Seed connected Jespa to the Children's Burn Foundation and the Torrance Memorial Medical Center.

The estimated cost of all the surgeries is more than $1 million, but many services were donated or deeply discounted.

The rest of the bills were picked up by the Children's Burn Foundation.

On Monday, doctors revealed the latest steps in Jespa's treatment. His hand and fingers are now separated and his second eyelid can finally close.

"Now I am very happy. I can close the eyes without something coming in, flying in like flies," Jespa said.

Jespa's his first handshake was reserved for Matthew Reiss, the doctor who made it all happen.

"When he sees the new things we have been able to do, the excitement and happiness about it, it is priceless," Reiss said.

The surgeries have been painful and there will be difficult physical therapy ahead, doctors said.

Jespa's scars also need more time to heal, but his gratitude to the medical staff is pure and unblemished.