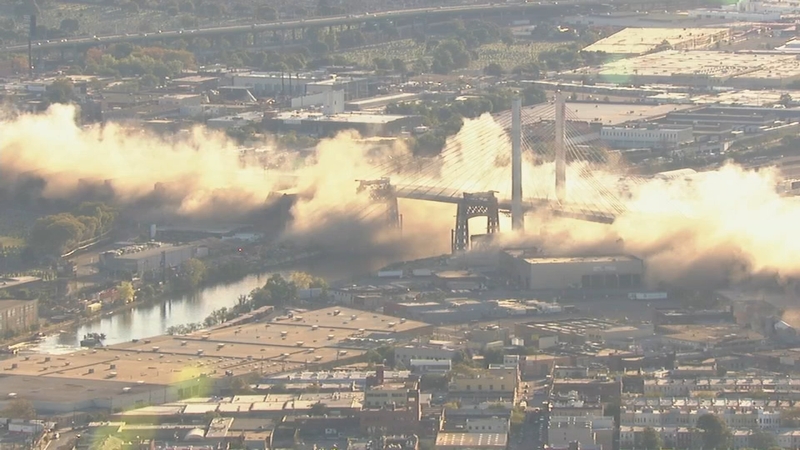 NEW YORK (WABC) -- Talk about going out with a bang.

New York's old Kosciuszko Bridge between Brooklyn and Queens was brought down on Sunday morning with a controlled demolition.

Gov. Andrew Cuomo was among those watching as the span came down.

The eastbound span of the new Kosciuszko Bridge opened in April. The second span is scheduled to be finished by 2020.

The old Kosciuszko Bridge opened in 1939. It's named for Tadeusz Kosciuszko, a military engineer from Poland who came to fight for the independence of the American colonies.

The bridge was demolished using a method called "energetic felling," which is technically not an implosion.

NewsCopter 7 was over the scene as the old Kosciuszko Bridge was demolished..

The tons of steel were lowed onto barges to be shipped off for recycling and the area will be prepared for construction of the westbound lanes of the new bridge.

"We have to get to work rebuilding New York for the next century so when our children grow up, New York has the same energy and the same vitality it had today," said Gov. Cuomo.

It was supposed to happen over the summer, but the work was delayed. Sunday's controlled demolition will free up space to complete construction of the second span.

The builders investigated several options for lowering the old steel truss spans, and concluded that energetic felling was the safest, most effective, and least intrusive method.

Energetic felling is not an explosion, rather small charges are placed at key joints on the bridge like tiny surgical instruments that cut key steel connections, allowing gravity to do the work.

The bridge approach spans did not break apart, but instead were to fall intact onto a prepared landing area.

To reduce vibrations when the bridge approach spans fell, concrete and asphalt was removed from the decks. In addition, cushioning berms were added to the landing area to absorb the bridge as it dropped and ensure vibration effects were negligible.

The process is said to meet all New York codes, including FDNY and MTA Codes.

Earlier this year, steel cables were used to slowly lower the center part of the span approximately 125 feet onto barges in the Newtown Creek, leaving only the outer shell.

The Kosciusko Bridge project has been expedited and is scheduled to be completed in 2019, a full four years ahead of the original project schedule.

Ultimately, the bridge is expected to accommodate 200,000 cars per day. By comparison, the original bridge was built for only 10,000.