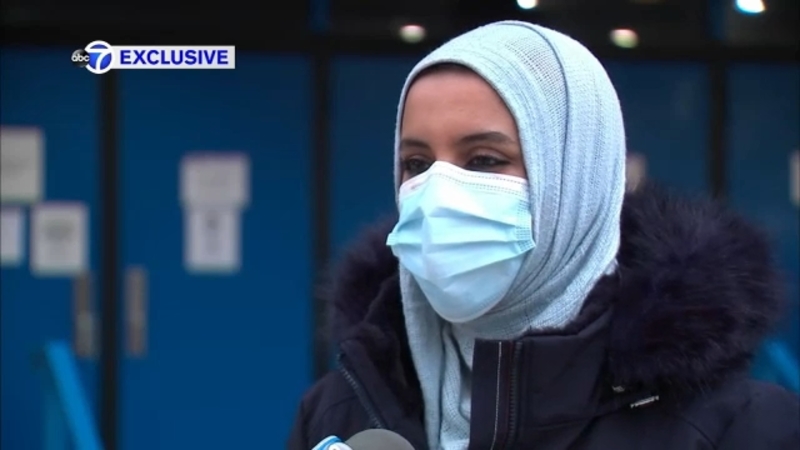 Muslim student speaks out after teacher called her 'terrorist'

UPPER WEST SIDE, Manhattan (WABC) -- Students are speaking out after a New York City high school teacher allegedly harassed a Muslim student and called her a terrorist.

Classrooms are supposed to be a safe space for students.

But 16-year-old Duha Elkhouli says that's not the way she feels behind the doors of LaGuardia High School on the Upper West Side.

"Every time I walked into that classroom I just felt ashamed of myself and my religion and my identity," Elkhouli said.

Elkhouli, who is Muslim, says it started after a teacher in 2019 allegedly called her a terrorist, in front of the entire class.

Eight protesters were arrested at Trump Tower Wednesday night, as NYPD officers were advised to be on alert for potential unrest.

"He said 'oh I thought you were practicing how to pick locks' and I said 'I don't need to practice that's because why would I practice that?' and he said 'because you're a terrorist,'" Elkhouli said. "Some kids stood up for me and they were telling him like to take it back and that's wrong and he shouldn't have said that."

A Department of Education spokesperson says "we are aware of this allegation, and it is currently the subject of an ongoing investigation."

Eyewitness News emailed the teacher to get his side of the story, but he declined to comment.

Ahmed Mohamed is the legal director at the civil rights organization CAIR.

"We want a fair and impartial investigation into the incident," Mohamed said. "This is an Islamophobic incident. We want the department of education to take it seriously."

"Duha's case it's not the only one. There are so many students that have micro aggressions, discrimination, racism," student Abigail Rivera said.

But because of Elkhouli's alleged incident, students here formed a group called the Young Idealists, to support each other.

Josh Einiger reports President Trump's Twitter account has been suspended permanently, citing "the risk of further incitement of violence" following the deadly insurrection at the

"School is supposed to be a place where we learn to respect ourselves and have self-love," student Melanie Louis said. "It's honestly difficult to love ourselves if we're hearing racist and stereotypical remarks from students, administrators, and staff members."

"You're afraid to say anything back. We didn't really know what to do because it's so surprising to hear a teacher say something like that to you in front of all the students, it wasn't even in private. It was just disgusting," student Amanda Reynolds said.

"Disrespected so many of his students and I don't think he deserves any respect in return," student Darah Barenholtz said.

"I kept having panic attacks and I would leave the classroom," she said. "Because I couldn't stand it anymore. I couldn't process the stuff that I was learning."

What has gotten her through the alleged incident she says were the young women standing by her.