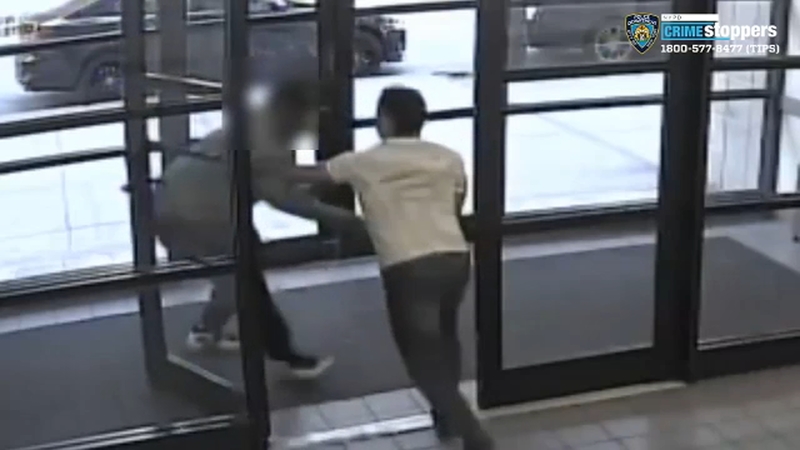 TREMONT, Bronx (WABC) -- A livery cab driver turned himself in to police Monday morning for an attack in the Bronx, but the driver maintains he was the victim.

Sandy de Jesus Rodriguez, 42, says he was defending himself when he pulled a knife on a fare on October 13.

Surveillance video from October shows Rodriguez arguing with a man in the entry of a building in the 2300 block of Webster Avenue then pulling a knife.

He claims the man's girlfriend skipped her fare and then stole $190 from him months earlier. When he tried to retrieve the money, Rodriguez claims, he was confronted by the woman's 21-year-old boyfriend.

The boyfriend was stabbed during the incident.

"We know that the videotape does not look good for him," said Fernando Mateo with the NYS Federation of Taxi Drivers. "We understand that he has an object in his hand and he is waving it. But at no moment did he stab the person who robbed him."

On Sunday, the driver defended himself, saying the boyfriend was never stabbed in the first place. Police, however, say the victim was wounded in the torso and treated an area hospital.

Rodriguez arrived at the police precinct with Mateo by his side.

"So we're hoping Rodriguez, who has no record, has been driving for a year, is a family man, works 12 hours a day seven days a week, we're hoping that after his attorney gets here he will be released," Mateo said.

Mateo says Rodriguez acknowledges he made a mistake. Investigators listened to his side of the story, kept the livery driver in police custody and ultimately charged him with assault, menacing and criminal possession of a weapon.