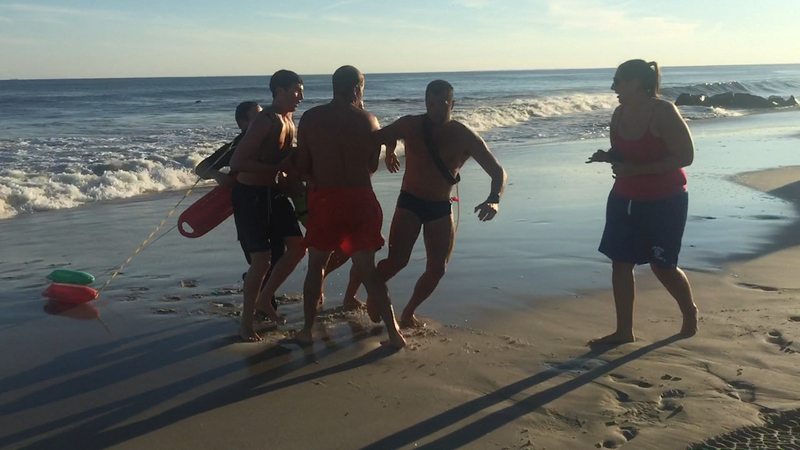 LONG BEACH, New York (WABC) -- Several beaches across the Tri-State area are closed to swimmers because of rip currents.

One man drowned after swimming off Long Beach Monday evening, while another swimmer was rushed to the hospital.

Lifeguards rushed the swimmers to shore after pulling both from the swirling rip currents near Edwards Boulevard.

Alvarez Rodolfo-Lorenzo, 26, of Brooklyn, was the first drowning in Long Beach this summer. It happened at 6:30 Monday evening after the city's lifeguards were off-duty, but the guards returned when they heard the emergency call.

When police responded, lifeguards were performing CPR. Rodolfo-Lorenzo was taken to South Nassau Hospital where he died.

The second person pulled from the water was taken to Long Beach Medical Center and is expected to survive.

"Yeah, somebody came running up to tell us that there's two guys in the surf need help, and I only saw one, and then when I started running down, I saw a limp body in the surf, and I took that one and my son went out and got the guy who was way out that was losing it," Fayans said.

"We let the lifeguards take it from there, but we were able to run out with our surfboards and try to bring them in," said Maxwell Fayans, a surfer.

Chief lifeguard Paul Gillespie said the waves were as high as 6 feet Monday and several other swimmers needed to be rescued hours earlier.