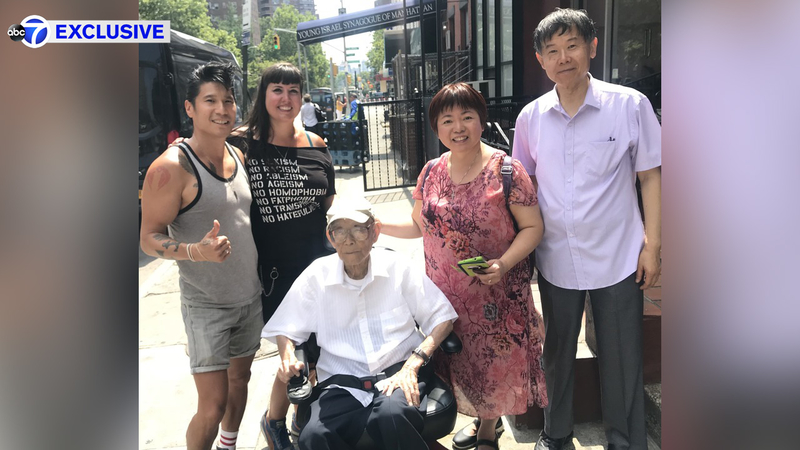 LOWER EAST SIDE, Manhattan (WABC) -- A couple who saved a 103-year-old man lost in Manhattan with the help of a popular app had a powerful reunion Wednesday.

It all started when Lixin Shao was at Columbus Park in Lower Manhattan watching a game of chess with his 103-year-old father Lin Shao, who uses a wheelchair. All of a sudden, his dad took off.

"When I turned around, I couldn't see him anymore," Lixin said. "I was very worried."

Lixin panicked and went to his father's apartment, but there was no sign of Lin there. He then scoured the neighborhood, worried because a rain storm was moving in. It was about 6:30 p.m. and getting dark, so Lixin called 911.

Across town, Melissa McIntyre was riding a bike on the Lower East Side and spotted a man having a tough time getting around potholes in his wheelchair.

McIntyre didn't stop, because there was a jogger also right there who she assumed would help.

"My heart kind of tugged," McIntyre said. "I didn't stop. That sits with me."

She got home and her fiance, Ken, had just received an alert from Citizen App saying NYPD officers were out looking for a man who matched Lin's description. McIntyre could not believe it and told Ken she had just seen the very same man.

The couple called police, and within minutes, Lin was reunited with his son. Everyone said if it hadn't been for that alert, this could have all ended much differently.

"Suddenly all of the cylinders were firing," Ken said. "I'm like, OK, we had to jump into action."

Lin's family got to meet the couple for the first time Wednesday, thanking them for connecting the dots. Lin was also grateful for the NYPD.

"We're strangers, but strangers just helped us," Lixin said. "I think they are good Samaritan(s)."

Citizen App launched about a year and a half ago, but the app added that missing persons alert just four days before Lin disappeared.

He traveled about two miles in his wheelchair over a span of about four hours. Lin only remembers calling out for help in the rain in his native Mandarin.

"It's an honor to be a part of supporting someone else in a moment of distress," McIntyre said.