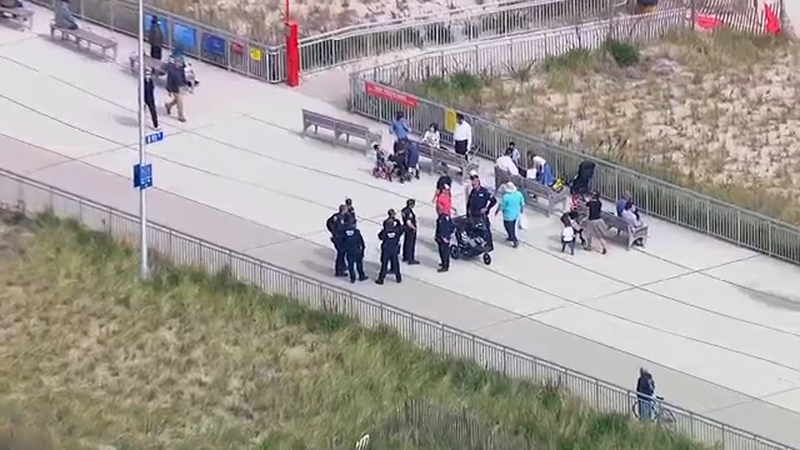 ROCKAWAY BEACH, Queens -- A man who was pulled out by a strong current at a Queens beach drowned Friday afternoon, officials say.

Officials say three men in their early 20s were in the water when the current got too strong and they got pulled.

Two of the friends were able to help each other out, but the third was pulled under and did not make it to shore alive.

Beachgoer, Sean Byrne, says he saw a plane land near a wood jetty and emergency crews rushed into the water to grab the body. He says they tried to resuscitate him, but it was too late.

Ramirez was rushed to St. John's Episcopal Hospital where he was pronounced dead.

It's the city's first drowning of the season, and it comes right at the start of Memorial Day weekend.

It was a life-changing decision that was made despite the all the warnings.

Red flags are up everywhere on city beaches and lifeguards would not have started until Saturday under the city's traditional summer schedule.

All of this happening after New York City Mayor Bill de Blasio gave strict warnings for people to stay out of the water as all city beaches remain closed.

In a tweet, the mayor expressed his condolences to family and friends of the victim, but urged New Yorkers to heed the warning that there is no swimming allowed on city beaches.

I need every New Yorker to heed the warning: there’s NO swimming on our beaches during this crisis. It is NOT safe.

We don’t want want to fence off the beaches but we will if we have to.

Council Member Donovan Richards also expressed his thoughts on the situation via Twitter.

A drowning on Rockaway Beach already. God help us all.