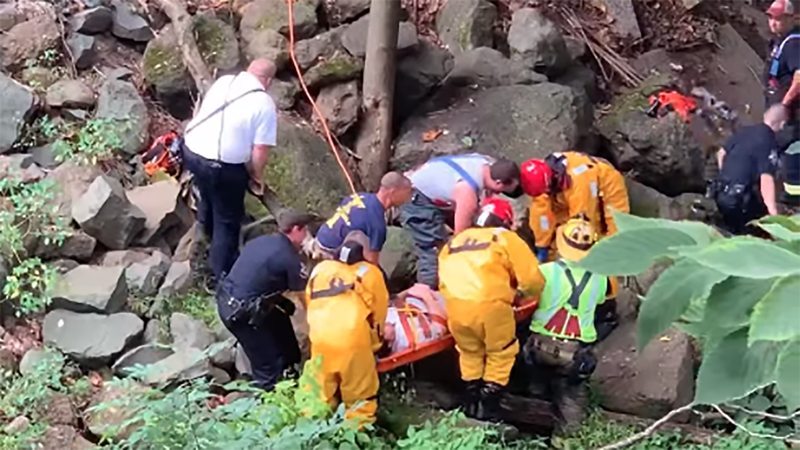 SUFFERN, New York (WABC) -- A New York man is recovering after being trapped along a steep riverside rock embankment for several days.

Authorities say the 47-year-old man was out for a walk when he fell off the railroad trestle bridge that goes over the Mahwah River in Suffern.

Rescuers think it was close to a 30-foot fall, and the man suffered serious enough injuries that he could not climb out to safety on his own.

A passerby heard the man's cries for help down the rock-lined ravine where he landed and called police.

"He was walking over the trestle bridge, he slipped when he was trying to descend or climb down the bridge and fell into the river," Suffern Mayor Edward Markunas said. "He's very lucky that there were passersby to notify the police department."

He was rescued Thursday by Suffern police and Suffern volunteer firefighters and had reportedly been stuck for three days.

The victim was said to be sitting up in the water, and in order to get to him, officers had to climb down the steep rock embankment.

"We stabilized him, put him into the basket, and then the challenge was getting him up that steep embankment," Markunas said. "They needed to put down these ladders in order to hoist him up, you know, drag the Stokes basket up the ladder and to recover him and get him to Westchester Medical Center."

The victim, from Montebello, was transported to to the hospital to be treated for hypothermia and injuries to his back, legs and feet.