Man shot, killed by NYPD known throughout his Brooklyn neighborhood 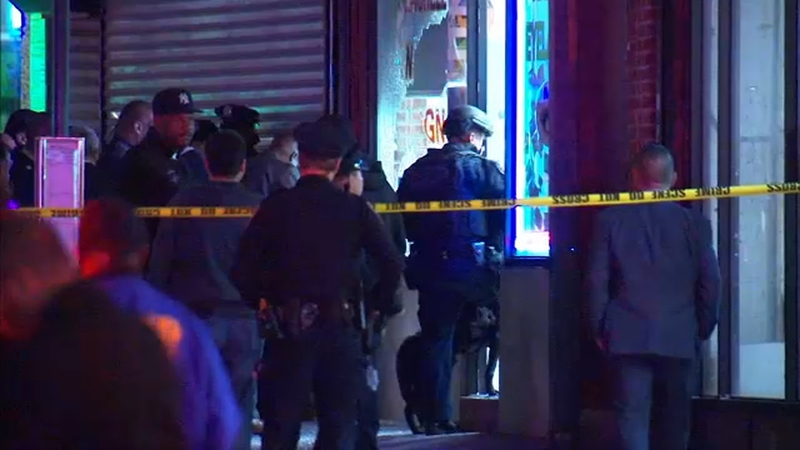 Man shot, killed by NYPD known throughout his Brooklyn neighborhood

BROWNSVILLE, Brooklyn (WABC) -- The man who was shot and killed by police in Brooklyn Friday has been identified as Kwesi Ashun, a man with a history of mental illness who is known throughout his neighborhood for selling T-shirts.

One of the two NYPD officers involved in the confrontation with 33-year-old Ashun remained in a medically induced coma Saturday morning.

Police said the scenario played out around 5:00 p.m. at Gold Mine Nail Salon near Mother Gaston Boulevard and Sutter Avenue in Brownsville as police tried to arrest a man who urinated in the middle of the salon.

Workers had flagged down police who were driving nearby, and as police attempted to place the disorderly man under arrest, Ashun entered the business and interfered.

Police said he hit one of the cops in the head with a metal chair. The officers then tried to use a Taser on Ashun before opening fire and shooting him six times. He was pronounced dead at the scene.

Ashun, of Brooklyn, has a history of mental illness -- bipolar disorder and schizophrenia - and a mobile crisis team evaluated him at his home earlier this month.

He had a 2004 arrest for attacking a police officer that appears to have been sealed because he was diagnosed at that point with mental health illness. He had another interaction with police in 2008 as an emotionally disturbed person.

The initial suspect, identified as 26-year-old Dewayne Hawkes, was chased down following the shooting but was caught. Hawkes, who had an active warrant for criminal mischief, faces several charges, including resisting arrest and disorderly conduct.

The injured officer, a 21-year veteran who has spent a long time in the 73 Precinct -- arguably the city's most dangerous -- is in a medically induced coma. Officials said they are hopeful he will be OK.

His partner, a rookie, was also treated and released from the hospital following the incident.

This is the 11th police-involved shooting this year in which the suspect was killed, and it is the fifth police shooting in just 10 days in the city.

Earlier this week, an NYPD officer who was shot in the chest in a Harlem apartment building, and the week before, a suspect was shot and killed by police after a violent struggle with officers in the Bronx.