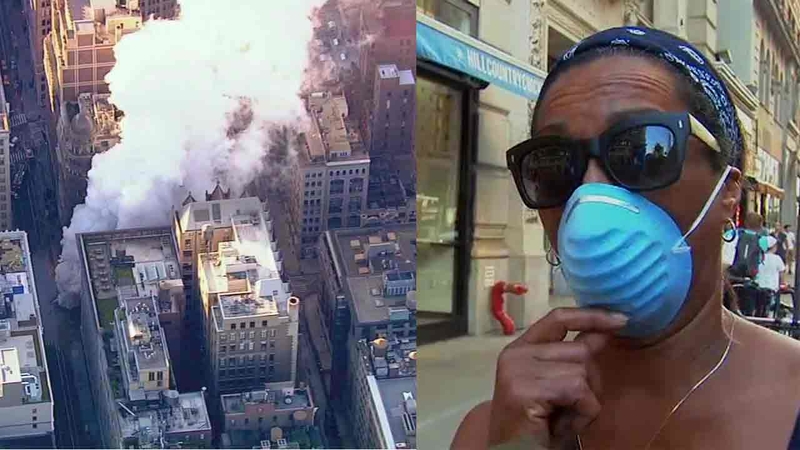 FLATIRON DISTRICT, Manhattan (WABC) -- At least 500 people remain out of their homes and businesses after Thursday's steam pipe explosion in Manhattan's Flatiron District.

Crews were on the scene Friday morning, continuing repair work at the giant crater on Fifth Avenue that opened up as a result of the blast.
EMBED More News Videos

Josh Einiger has the latest details.

Environmental teams are working to clean up the asbestos that was released when the 86-year-old steam pipe exploded, and an "exclusion zone" running from 19th Street to 22nd Street and Sixth Avenue to Broadway has been established as the work proceeds,

Authorities are asking people to stay away from that area and also out of the "hot zone," where evacuations took place Thursday. They say the air is safe, but that area is closed to traffic. If you are walking through the area, you have to wear a mask.

OEM Commissioner Joseph Esposito said the plan will be to open the exclusion zone block by block, with 19th Street the first to be cleaned. The city hopes to reopen 19th Street first, and then Fifth Avenue between 18th and 19th streets. And they will go from there.

But even when all the cleanup is done and the area is decontaminated, Fifth Avenue may only be open to one lane of traffic, because city still expects to be investigating what happened at the rupture point.

Earlier, Con Edison discussed catch basins to capture the runoff from this weekend's anticipated rain, but OEM said they are planning to put sandbags in a circle to create a berm around the rupture point. So when it rains, the contaminated water would not run off, and they can capture and dispose of it.

OEM admitted that of the 49 buildings affected, not many have been washed on the outside. He called it "a difficult process...truthfully a lot of those facades have not been done yet."

It could take up to six months to determine the cause of the cause of the explosion. Crews in HazMat suits have been in and out of the evacuated buildings since Thursday, grabbing pets and belongings for people.

Con Edison says if you were in the immediate area when the pipe exploded, you should have bagged up your clothes by now.

And they want you to turn those clothes in, because long-term exposure to asbestos can cause serious health problems, even cancer.

"We're going to work from an abundance of caution," Mayor Bill de Blasio said Thursday. "Now that we know there's asbestos present, we're not going to cut any corners. We're going to be very thorough."

The utility has representatives on site to collect contaminated clothing, and a reception center has been set up at the Clinton School at 10 East 15th Street for anyone who has questions or needs an escort to their building.

For updates on the transit situation in the area, visit MTA.info.