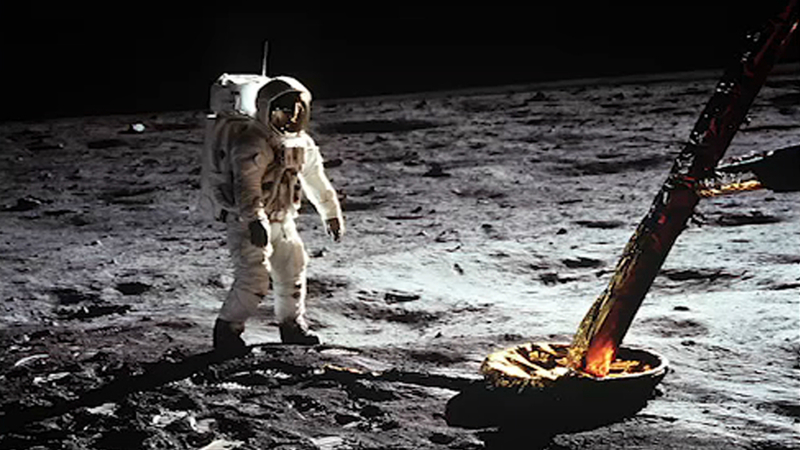 BETHPAGE, Long Island (WABC) -- As the world celebrates the 50th anniversary of Apollo 11's landing on the moon, we hear from Apollo astronauts about what it was like to be pioneers of space exploration.

"The Apollo space suit was quite comfortable - unlike the Gemini space suit from earlier missions. There were joints at the knees, elbows, and waist for comfortable movement," said Rusty Schweikart, Apollo 9 Lunar Module Pilot. "I got to test it ahead of my friends to later run around the moon."

"The launch on the Saturn was really an amazing adventure. It shook like crazy from side to side," said Charlie Duke, Apollo 16 Lunar Module Pilot. "So it was quite the ride."

"First couple hours I felt like I was going to be seasick," said Duke. After that, he said he had a quiet time. "Weightlessness is a ball. You have a great time," said Schweickart.

They said it's worse than camping food! Astronauts don't feel hungry much but they eat a little when they can.

"It's like a jewel out there," said Schmitt. "Truly breathtaking."

"It was very beautiful to see the swirling fireball trailing," said Haise. The sun is bright red and turns to orange. Once you are in the atmosphere you really can't miss the ocean - it's so big.

"Once you splashdown, the heat starts spilling into the cabin," said Schmitt. "You really want to get out of that space cabin. It's warm and humid."

Hopefully by the middle of the next decade, if Congress sees the appropriate fund, we will see these Astronauts on Mars.

"I have no doubt. Human beings will go to Mars," said Schmitt. "I hope it's Americans."