Mother Teresa to be made a saint after pope approves miracle 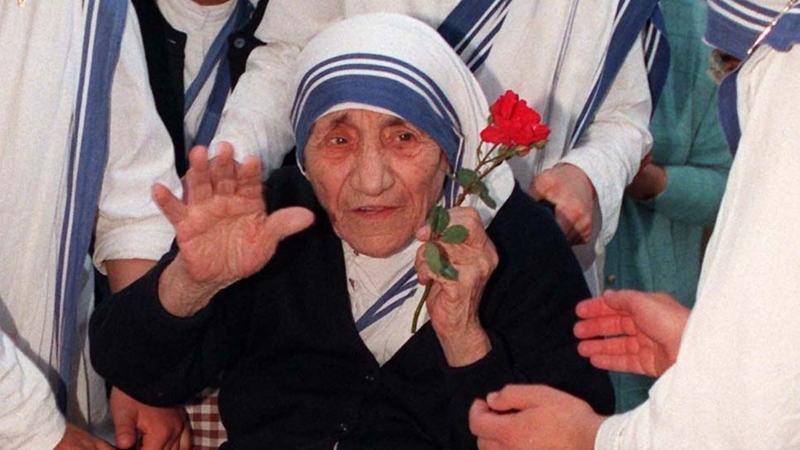 Vatican clears the way to sainthood for Mother Theresa

VATICAN CITY -- Mother Teresa, the tiny, stooped nun who cared for the poorest of the poor in the slums of India and beyond, will be declared a saint next year after Pope Francis approved a miracle attributed to her intercession.

The Vatican on Friday set no date for the canonization, but it is widely believed that it will take place in the first week of September to coincide with the 19th anniversary of Mother Teresa's death and during Francis' Holy Year of Mercy.

"With her work, she was always the symbol of mercy, not just with words but with her actions," said the superior general of Mother Teresa's Missionaries of Charity, the Rev. Sebastian Vazhakala.

Cardinal Dolan posted a message of excitement to social media:

Blessed Mother Teresa of Calcutta to be a saint. Praise God! What joyous news.

The Vatican said Francis approved a decree attributing a miracle to Mother Teresa's intercession during an audience with the head of the Vatican's saint-making office on Thursday, his 79th birthday.

The miracle in question concerned the inexplicable cure of a Brazilian man suffering from a viral brain infection that resulted in multiple abscesses. By Dec. 9, 2008, he was in a coma and dying, suffering from an accumulation of fluid around the brain.

The Rev. Brian Kolodiejchuk, the postulator spearheading Mother Teresa's canonization case, said in a statement Friday that 30 minutes after the man was due to undergo surgery, he sat up, awake and without pain. The surgery did not take place and a day later the man was declared to be symptom-free.

The Vatican later attributed the cure to the fervent prayers to Mother Teresa's intercession by the man's wife, who at the time of his scheduled surgery was at her parish church praying alongside her pastor.

"This is fantastic news. We are very happy," said Sunita Kumar, a spokeswoman for the Missionaries of Charity in the eastern city of Kolkata (earlier called Calcutta), where Mother Teresa lived and worked.

Born Agnes Gonxha Bojaxhiu on Aug. 26, 1910, in Skopje, Macedonia, Mother Teresa joined the Loreto order of nuns in 1928. In 1946, while traveling by train from Calcutta to Darjeeling, she was inspired to found the Missionaries of Charity order.

The order was established four years later and has since opened more than 130 houses worldwide to provide comfort and care for the needy, sick and "poorest of the poor."

Mother Teresa won the Nobel Peace Prize in 1979 for her work with Calcutta's destitute and ill - work which continued even after she herself became sick.

"The poor give us much more than we give them," Mother Teresa said in 1977. "They're such strong people, living day to day with no food. And they never curse, never complain."

At the time, her Missionaries of Charity order had nearly 4,000 nuns and ran roughly 600 orphanages, soup kitchens, homeless shelters and clinics around the world.

While Mother Teresa is known and admired by many around the world, she was not beloved by all. She was criticized for the quality of care in her clinics and for taking donations from Haitian dictator Jean-Claude Duvalier and disgraced American financier Charles Keating.

Detractors also opposed her stance against the use of birth control in Calcutta's slums, which was nevertheless in keeping with church teaching opposing artificial birth control.

Francis, whose papacy has been dedicated to ministering to the poor just as Mother Teresa did, was an admirer. During his September 2014 visit to Albania, Francis confided to his interpreter that he was not only impressed by her fortitude, but in some ways feared it.

Francis recounted that he had met Mother Teresa, an ethnic Albanian, when they attended a 1994 bishop synod at the Vatican together. At the time, he was Archbishop Jorge Mario Bergoglio.

"Bergoglio had Mother Teresa behind him, nearby, and he heard her intervene often with great strength, without letting herself in any way be intimidated by this assembly of bishops," the Vatican spokesman, the Rev. Federico Lombardi, later recounted. "And from that, he developed a great esteem for her, as a strong woman, a woman able to give courageous testimony."

But Bergoglio, who has long shown admiration for the women who raised him and taught him, added: "I would have been afraid to have had her as my superior, since she was so tough."

As if to underscore his connection to Mother Teresa, Francis on Friday celebrated Mass at a Caritas charity soup kitchen at Rome's main train station, where he told a few dozen homeless people and volunteers that theirs is the path to salvation, not that of the wealthy or powerful.

Pope John Paul II, one of Mother Teresa's greatest champions, waived the normal five-year waiting period for her beatification process to begin and launched it a year after she died, convinced of her saintliness.

During his quarter-century papacy, John Paul declared more saints - 482 - than all of his predecessors combined. Francis, however, overtook John Paul's record within two months as pope: In May 2013, he canonized more than 800 15th-century martyrs who were beheaded for refusing to convert to Islam.

Archbishop of Kolkata Thomas D'Souza said the news of the Vatican's decision on Mother Teresa was "the best Christmas gift one can get."