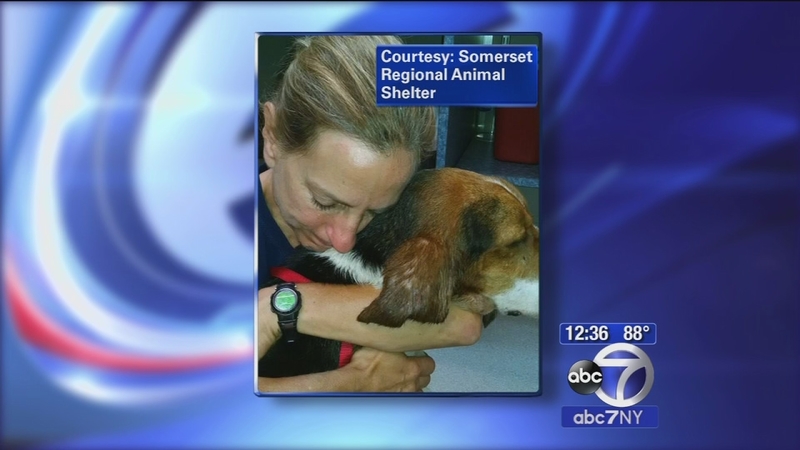 RARITAN (WABC) -- A dog that was lost for 42 days has been found and reunited with his family in New Jersey.

Gabriel, a 4-year-old basset hound, is being treated for dehydration, tick bites and a leg injury after his seven-mile journey, but he is expected to make a full recovery.

The pooch was adopted from the Somerset Regional Animal Shelter on July 19, but he was scared off during a walk one day later. He ran to the river in Manville with his leash still attached.

Everyone thought he would be found within hours, but days and weeks passed. His adopted family and volunteers spent hours searching the woods and river banks, knocking on doors, posting fliers and hanging posters, posting on social media, and sharing and sharing again, but there was still no sign of Gabriel.

Then, just before 10 p.m. Monday, a call was made to the Bridgewater police from a Martinsville resident reporting that a dog at large was now contained in a home.

An Animal Control Officer was asked to pick up the dog, and the officer immediately recognized Gabriel.

The dog also recognized the officer, climbing right into her arms.

Gabrile lost about 20 to 25 pounds and suffered maladies, but his leash was still attached and a microchip confirmed his identity.

Gabriel's family was notified, and all met at Animerge in Raritan to get Gabriel the medical attention he needed. He will stay at the hospital until an IV is no longer needed.