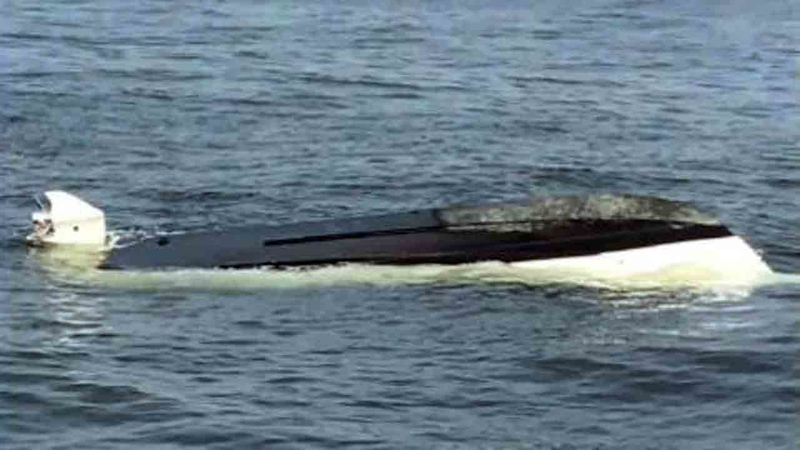 DEAL, New Jersey (WABC) -- A whale flipped a fishing boat about a mile off the Jersey coast, sending 2 people overboard and hanging onto the boat for their lives.

And suddenly the great beast was before them! He was ten stories high if he was a foot! Yes, a couple of fisherman were capsized today when a whale surfaced beneath their boat! Fortunately, no one was injured. https://t.co/egABlt0Boj pic.twitter.com/gpsWKI281h

The boat was approximately one mile off of Deal, Monmouth County when the two men saw the whale about 50 yards from them.

Before they knew it, the whale breached beneath the boat, causing it to capsize and they were in the water.

"They were just fishing and the boat lifted up, went up the one side and tossed them both out, you know overboard, and they were hanging onto the boat," Gary Szabo, a retired Trenton firefighter, said.

Szabo said he heard their mayday call on the radio while he was fishing about a half-mile away.

"It's unusual and probably a first for a lot of people that we ever heard involving a whale. There's been whales in the area, a lot of bait fish in the water. Last week we had a lot of porpoises in the area. It's not uncommon to see whales out there, (but) this incident was very unusual," Szabo said.

A couple of other boats also responded, but Szabo's boat is built for scuba diving, so he was able to get both men onboard.

"I'm just glad I was able to get them out easily. The boat can be replaced," he said.

The names of the men have not been released.