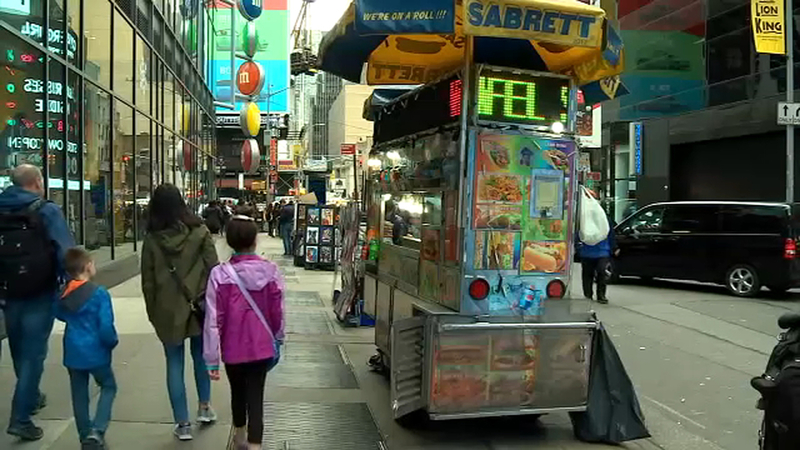 NEW YORK (WABC) -- New Yorkers are used to seeing street vendors, but a new proposal would allow for more on the city streets.

A state lawmaker wants to eliminate the cap on street vendor permits to allow more people to have their own business.

The vendors are part of the fabric of the city, selling just about every kind of food imaginable.

Ali Tarek, manning his family cart in Midtown Manhattan, weighed in on the issue.

"I think for them to be able to work, they should no limit the numbers, should be able to do what they want to do," said Tarek.

State Senator Jessica Ramos of Queens is proposing legislation that would do away with limiting the number of carts.

Right now the city issues about 5,100 permits but there's a long wait list. So many instead turn to the black market, where the licenses, which cost $200, are illegally rented out, in some cases for $25,000.

Ramos believes her bill would help those vendors come into compliance with current permitted vendors.

"These are folks who are trying to make an honest living and we really need to take advantage of this economic opportunity to generate about $70 million in additional sales tax revenue for the city and state," she said.

However, like Mayor Bill de Blasio, he believes doing away with the cap would be a mistake, and that the focus should instead be on a much tighter enforcement system.

"It's not anti vendor but we have crowded, busy streets," said Rigie. "We have brick and mortar restaurants throughout the city, a lot of vacant storefronts, so we need to support small businesses and make sure, if there are any new permits that are issued, it's done in a sensible way for New York City."

It would still be up to each city to decide where these carts can and can not drop anchor. As for Ali, the next generation of food vendors: "I don't want to continue with the business," he said. "I want to switch, be a lawyer of something like that."