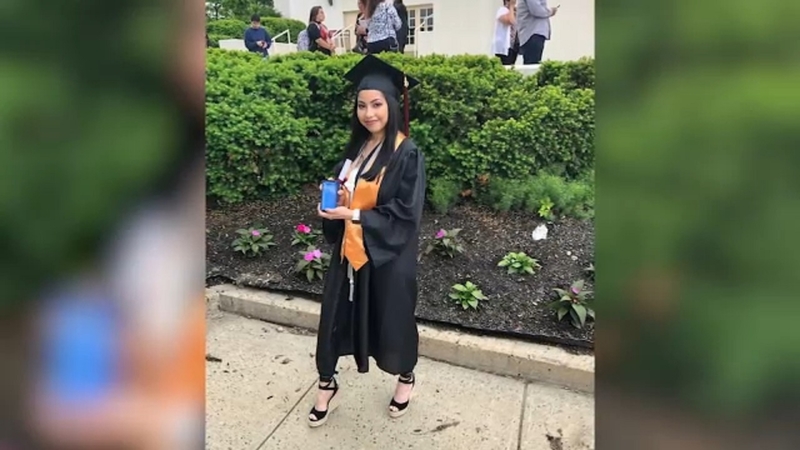 UNIVERSITY HEIGHTS, The Bronx (WABC) -- Family and friends paid their respects to the Bronx woman who died in a horrific crash on the Deegan last week. The driver also didn't make it.

Police say the driver of the car was speeding, but one of the victims says the truck it slammed into did not have the collision guards that could have lessened the crash.

Daybelis Lantigua was the apple of her family's eye and was just two days shy of her 23rd birthday when she died last week. On Saturday, with heavy hearts, family and friends came to pay their respects to this once vibrant girl.

'Day' as her friends call her, had just graduated with an MBA and was working at Starbucks in Hartsdale - she was living the dream.

That dream came to a crashing end last Friday morning when the BMW she was a passenger in slammed into a semi on the Deegan, lodging the car firmly underneath the truck.

The driver of the car was George Tyras, 24. His grieving brother told Eyewitness News, 'he was a loving kid, always had a smile, always wanted to see everybody happy.'

Police say Tyras was driving his BMW M3 at a high rate of speed.

The attorney is now putting the blame on the tractor-trailer, saying it did not have the proper safety equipment to stop the car from hitting it so forcefully.

Police say the truck driver did remain on the scene. He was not hurt.

There are no arrests in the case, and the investigation is ongoing.

Eyewitness News reached out to the trucking company but has not yet heard back.

For the second time in a week, a woman has fallen to her death from a Manhattan rooftop.