2nd police officer shot in the Bronx released from hospital

WABC
UPPER EAST SIDE (WABC) -- The second police officer wounded in a shootout with robbery suspects in the Bronx was released from the hospital Friday. 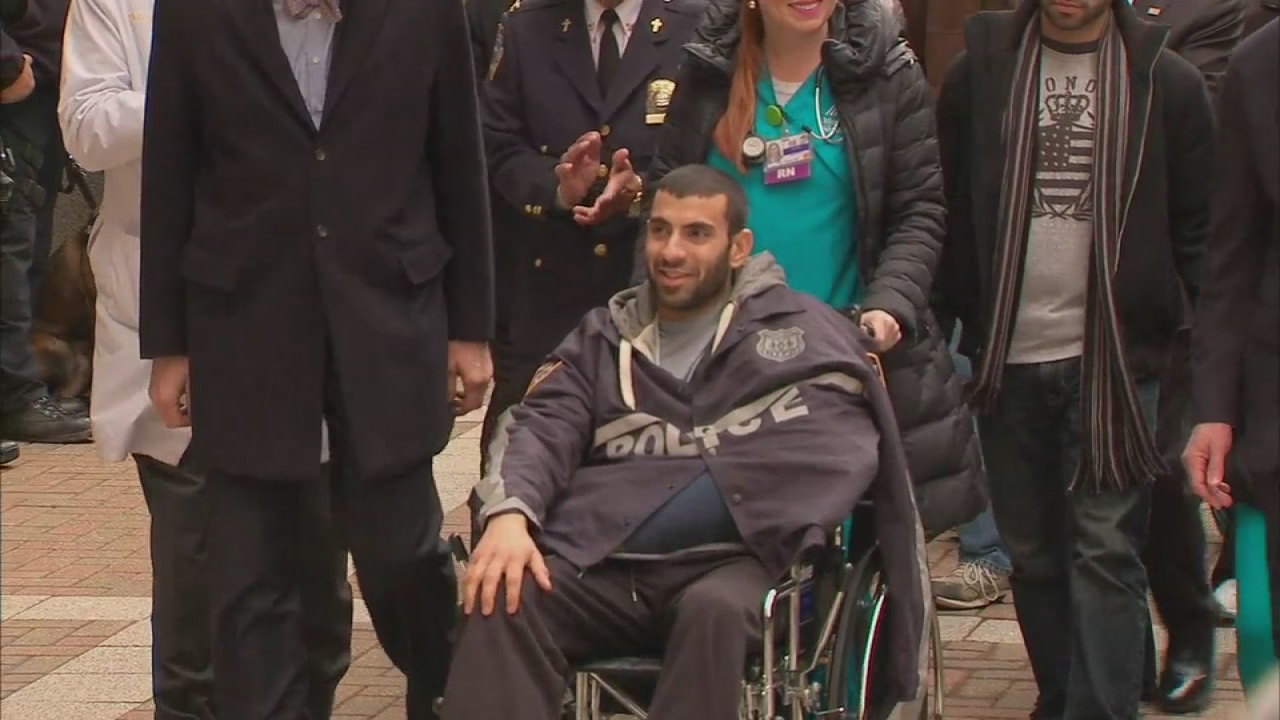 Officer Andrew Dossi leaves hospital
Dossi, who was wounded during a shootout in the Bronx, left Mount Sinai Hospital Friday
Hundreds of NYPD officers lined the path and applauded as 30-year-old Officer Andrew Dossi left Mount Sinai Medical Center on the Upper East Side in a wheelchair. He smiled and offered a thumbs up as he stood up and climbed into a police van. He did not speak.

"Today is a special day for Officer Dossi and his family," PBA president Pat Lynch said. "It was a long road here, but the terrific treatment they got, the doctors that helped here at Mount Sinai, that brought him back to the step that he's at today. He got out of the wheelchair and climbed into that police van for his journey on home. But it's not over for him. He still has rehabilitation to do, but he's a long way from where he was, and we thank everybody for that. We thank the citizens of the city for the support they've given every New York City police officer, but especially our two heroes that went to work one day and ended up getting shot and ended up in a hospital bed. But fortunately, both have walked out of the hospital. Today is our second one, and we're grateful forever for it."

Dossi arrived home, where his loving family is much happier to have him.

"I'm happy that my dad is home," daughter Adriana said. "He told me that it's kind of not comfortable. The bed are not. He doesn't like laying down in the bed all day. He wants fresh air."

Dossi was struck in the arm and lower back and required surgery. Officer Aliro Pellerano, 38, was wounded in the chest and arm and was released last Wednesday from St. Barnabas Hospital.

"He's doing much better," dad Jim Dossi said. "It's going to take a while for him to get back on his feet. The doctors at St. Barnabas and Mount Sinai did very good. They went out of their way to do everything for him possible. In time, he will be better. He wants to thank all of your support and everybody that's been here for him."

The other person involved, 28-year-old Joshua Kemp, is charged only in connection with the robbery.

The incident happened around 10:30 p.m. at East 184th Street and Tiebout Avenue in the Fordham sectoin. Near the corner of East 184th Street, authorities say the officers saw Polanco and Kemp and identified them as possible suspects. As they approached them, Polanco reportedly entered a Chinese restaurant on Tiebout Avenue and ordered a Snapple while Kemp remained outside. The officers walked up to Kemp, and that's when they say Polanco opened fire on the officers, one of whom returned fire.

Police said Kemp was struck by the bullet fired through the window of the Chinese restaurant, which went through his right bicep and hit one of the officers.

The two suspects then fled on foot toward Marion Avenue, with Polanco allegedly firing two more shots at the officers before carjacking a white Camaro. Dossi and Pellerano were wounded in the exchange.

Polanco, of the Bronx, was being closely tracked by detectives, who had determined his daily routine after his name was provided by multiple tipsters who saw his picture and called CrimeStoppers. He was arrested without incident.

Police said he was caught on security camera at the Chinese restaurant just before the officers were shot.

Kemp is believed to have shown up with a gunshot wound at Columbia Presbyterian Medical Center at 11 p.m. Monday. He has been in police custody at the hospital since then.

Police said Kemp initially told them he had been shot on Dyckman Street in Inwood, but his story quickly fell apart when police identified the guy that drove him to the hospital. Then, he reportedly gave up the entire story. Suspect in Bronx shooting of NYPD officers appears in court