3 stabbed at KKK gathering in California, including 1 with flag pole 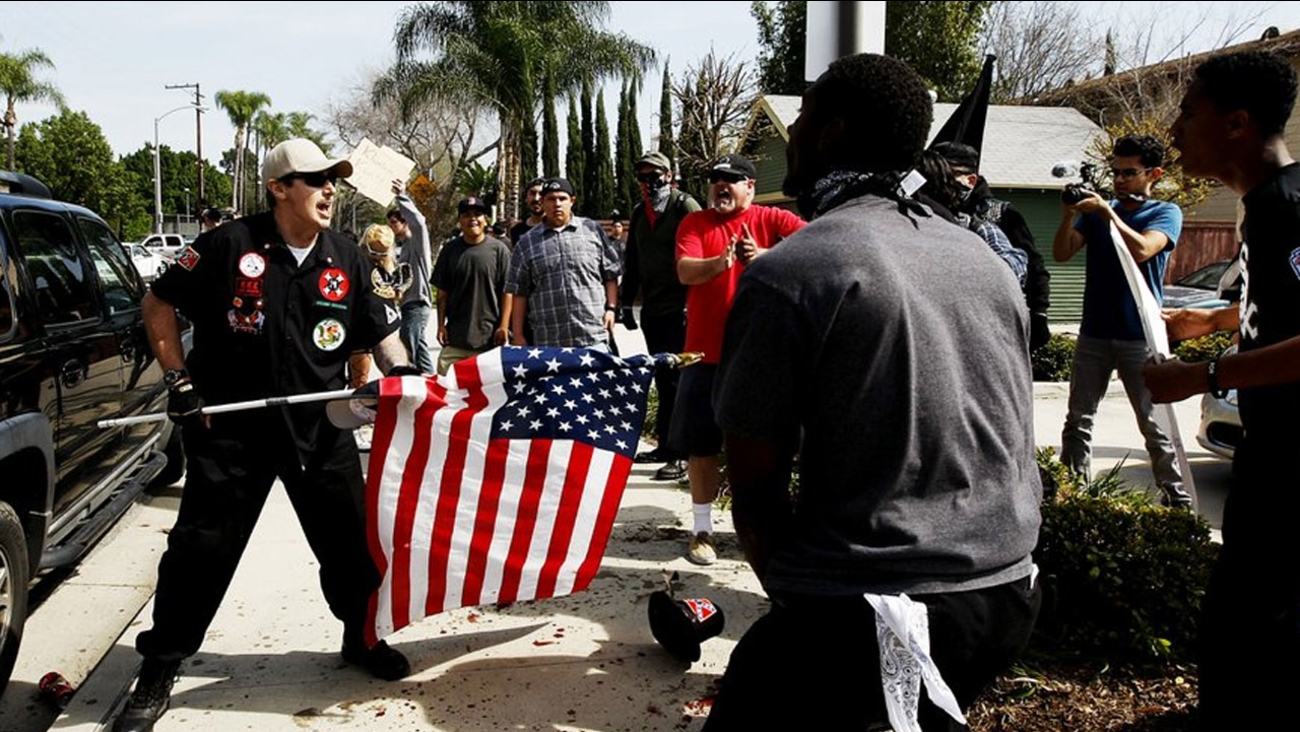 ANAHEIM, Calif. -- Dozens of protesters who heard about a planned Ku Klux Klan rally were waiting by a Southern California park when six people pulled up in a black SUV. They were dressed in black shirts decorated with the Klan cross and Confederate flag patches and took out signs that read "White Lives Matter."

Witness video show the Klansmen were quickly surrounded Saturday afternoon by the counter-protesters who shouted at them. Someone smashed the SUV's window. One KKK member stabbed a counter-protester with the decorative end of a flag pole, setting off a vicious brawl where three people were stabbed, one critically, and two were assaulted.

"I got stabbed," a man is then heard screaming, lifting his T-shirt to show a wound to his stomach. A fire hydrant where the man briefly sat was covered in blood.

"All hell broke loose," said Brian Levin, director of California State University, San Bernardino's Center for the Study of Hate and Extremism, who witnessed the violence. "I thought they were going to stomp these Klansmen to death."

Wyatt said police were present when the violence erupted, but he did not say how many officers were deployed.

Anaheim police had notified the public about the planned KKK protest Friday at Pearson Park, about 3 miles from Disneyland, and said they would be monitoring the situation for any violations of law. The department also said that while the group's signs and fliers might be provocative, they are protected by the First Amendment.

Levin said he did not see any uniformed officers at the park when the violence erupted. He said he tried to get between counter-protesters and Klansmen to help quell the melee until officers were able to reach the scene.

"I'm still kind of a little bit shaken by it," he said.

Police Chief Raul Quezada defended the way his department handled the situation, saying a contingent of officers were dedicated to the KKK rally and counter protest and they were able to arrest all of the main participants in the clash.

"Preventing violent confrontations is always our goal; unfortunately the handful of individuals committed to criminal behavior this afternoon caused the violent episode," he said in a statement.

Chris Barker, who identified himself as the imperial wizard of the Loyal White Knights of the Ku Klux Klan, said his members were holding a peaceful anti-immigration demonstration and acted in self-defense.

"If we're attacked, we will attack back," said Barker, who did not attend the rally and spoke by phone from North Carolina. The organization lists Pelham, N.C., as its headquarters. Last year, the group drew headlines when it protested the removal of the Confederate flag from the South Carolina Capitol.

Twelve people were initially arrested, but five were released after investigators reviewed video of the confrontation, Wyatt said.

The critically injured man was upgraded to stable condition.

The KKK has a long history in Anaheim. In the 1920s several Klansmen held elected office in the city, which was overwhelmingly white but now has a majority of Hispanics among its roughly 350,000 residents.

In January 2015, packets containing fliers condemning the Rev. Martin Luther King Jr. and supporting the Ku Klux Klan were left in the driveways of about 40 homes in Santa Ana, about 8 miles south of Anaheim. The fliers opened with the heading "On Martin Luther King Day, you are celebrating a communist pervert." The bottom of the fliers stated they came from the "Loyal White Knights of the Ku Klux Klan."

Nationwide, the number of active KKK groups increased to 190 in 2015 after falling in 2013 and 2014, according to the Southern Poverty Law Center, which tracks hate groups.

Giovanni Namdar, 25, who runs an auto body shop near Pearson Park, said he saw people speaking passionately on a stage before the violence broke out. He later saw a swarm of police cars and helicopters flood the area.

Namdar said he was stunned to learn about the KKK's presence in his backyard.

"It's pretty disturbing," he said. "I didn't know they were around this area."