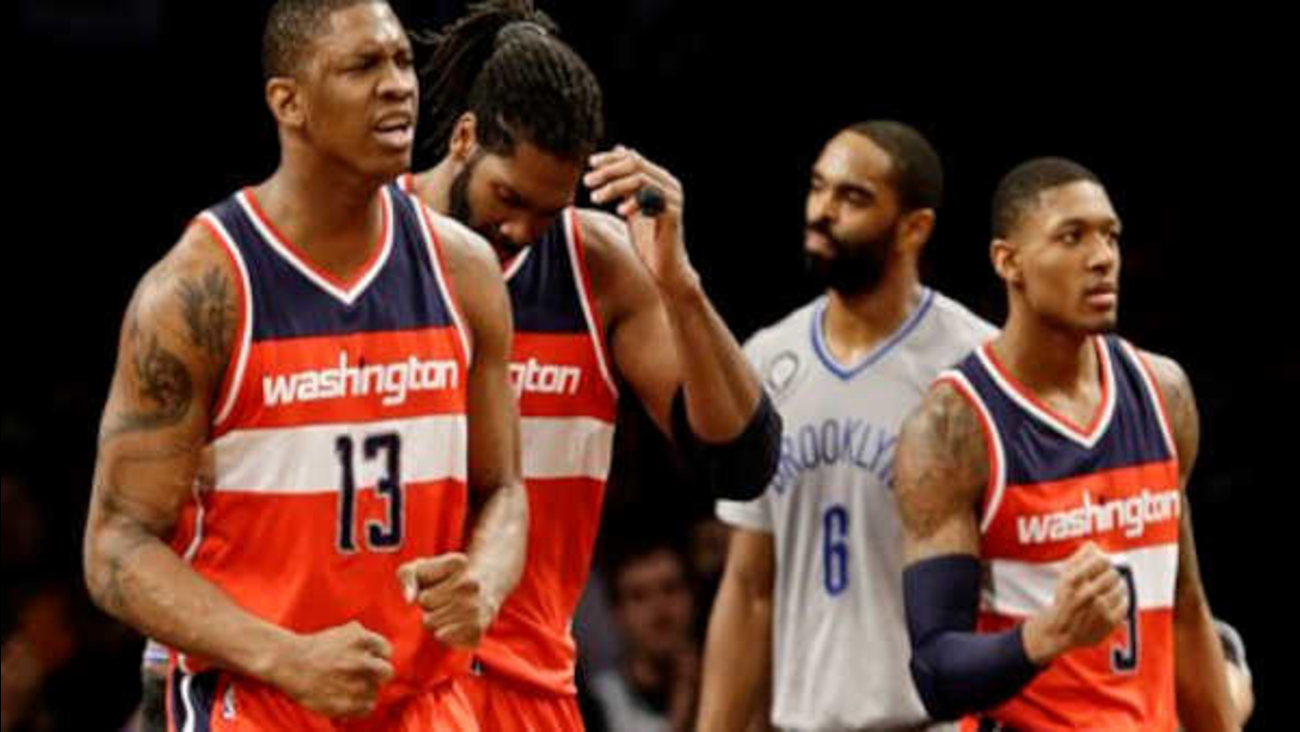 BROOKLYN -- Nene scored 20 points, three other Washington big men were in double figures, and the Wizards beat the Brooklyn Nets 99-90 on Saturday night to split their home-and-home series.

Overpowered by Brook Lopez on Friday in Washington, the Wizards bounced back behind 10 points and 16 rebounds from Marcin Gortat, and strong bench efforts from Kris Humphries (13 points) and Kevin Seraphin (12).

Bradley Beal finished with 17 points, nine rebounds and eight assists for the Wizards, who shot 52 percent from the field to overcome their 14-of-27 effort from the free throw line.

Jarrett Jack had 22 points and eight assists for the Nets, who had snapped a seven-game losing streak with their 102-80 victory Friday.

Lopez scored 26 points off the bench in that game and had 13 by halftime of this one. But the Wizards held him to two points after the break and turned around the game with an 18-2 run in the third quarter

The Nets led 51-50 after a close first half in which neither team led by more than five. A good start to the third quarter had them ahead 63-56 five minutes into the period. But Nene and Gortat began wearing them down, scoring 10 straight to go ahead 66-63 when Nene dunked forcefully between Kevin Garnett and Lopez.

Jack stopped the run with a basket, but Washington answered with eight more in a row to build a 74-65 advantage on Rasual Butler's basket.

Brooklyn tied it at 81 early in the fourth before Seraphin had two baskets and Humphries another in an 8-2 burst that made it 89-83 midway through the period, and Nene had a three-point play about 3 minutes later after the Nets had cut it to three.

Wizards: Paul Pierce received a mixed reception when he was announced with the Washington starters. The veteran forward played last season for the Nets before signing with Washington in July. ... Washington improved to 23-1 overall and 8-0 on the road when holding opponents to less than 100 points.

Nets: Lopez got two points he didn't really deserve in the first quarter when Gortat tipped a missed free throw by Mason Plumlee into his own basket. Lopez got credit as the closest Nets player. ... Kevin Garnett, playing both ends of a back-to-back for one of the few times this season, had eight points and 10 rebounds. He fell to 10-9 against Pierce, his former teammate in Boston and Brooklyn.