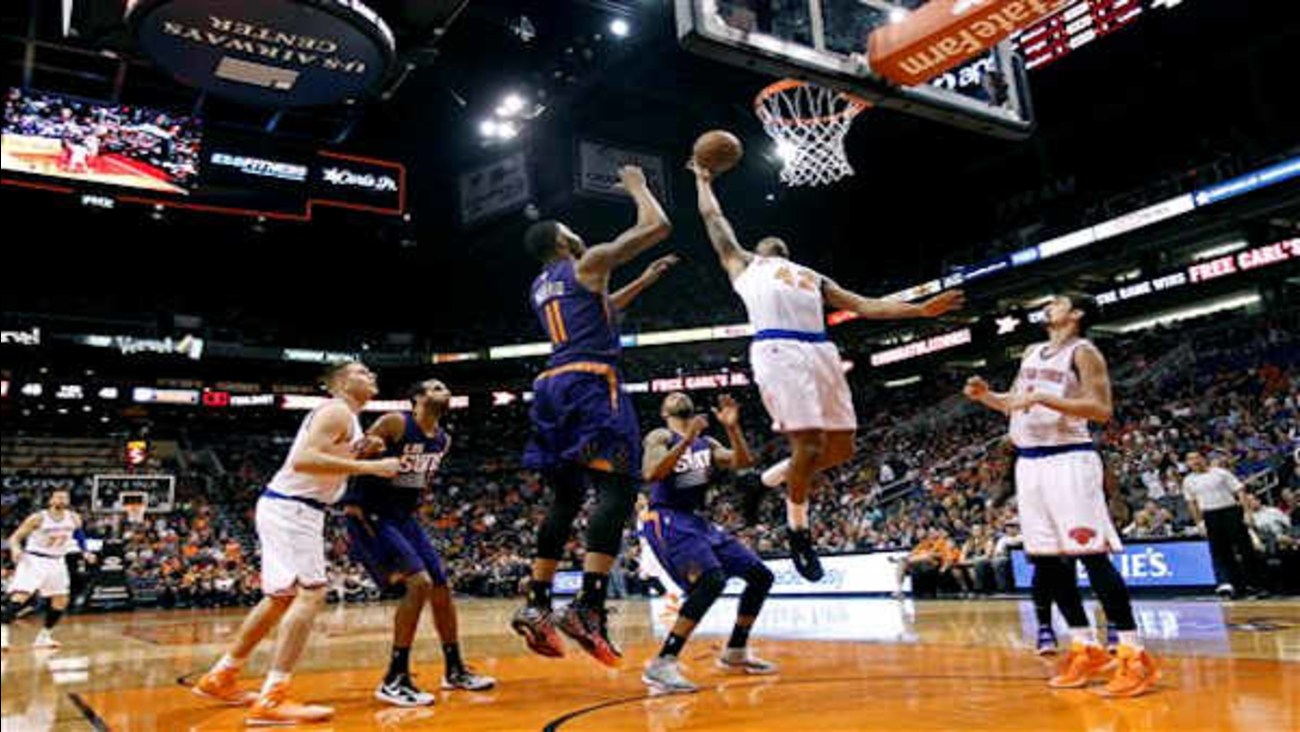 PHOENIX -- Eric Bledsoe fell a rebound shy of a triple-double and the Phoenix Suns overcame a sluggish first half to beat the New York Knicks 102-89 on Sunday night.

Marcus Morris added 20 points for the Suns, who were without starters Brandon Knight and Alex Len because of sprained ankles. Brandan Wright, starting in place of Len, scored a season-high 18 and matched his season best with 11 rebounds.

The Knicks, blown out Saturday night at Golden State, led by 11 in the first half and were up 48-47 at the break.

Phoenix stayed three games behind Oklahoma City for the No. 8 playoff spot in the West and is two behind No. 9 New Orleans.

Phoenix took the lead with the first basket of the second half. Langston Galloway's 3-pointer put New York back ahead 51-50 but the Knicks never led again.

The Suns scored the next nine points to go up 59-51 on Bledsoe's fast-break layup with 7:39 left in the third quarter.

Phoenix stretched it from there. Bledsoe scored twice and P.J. Tucker sank a 3-pointer in a 13-3 run that put the Suns up 96-80 when Marcus Morris grabbed his own miss and scored with 4:45 left.

The Knicks took their biggest lead of the first half with a 13-4 run that put them up 29-18 late in the first quarter.

New York led 46-38 with 3:51 left in the half but Phoenix scored the next seven points to cut the lead to 46-45 on Markieff Morris' left-handed hook shot. Lance Thomas' one-handed dunk on a rebound put New York up 48-45, then Bledsoe ended the half with a driving dunk to make it 48-47 Knicks at the break.

Knicks: Tim Hardaway Jr. sprained his right wrist late in the first quarter and did not return. Cleanthony Early Cleanthony Early left later with a sprained left ankle. ... New York was 0-13 on the road against the West until its win at the Lakers on Thursday night.

Suns: Bledsoe has two career triple-doubles, both this season. ... Coach Jeff Hornacek says that, because the team has such a long layoff, Knight and Len could be back for the next game against New Orleans on Thursday night. Knight missed his third straight game, Len his first. ... The Suns were called for a technical because two delay-of-game calls.