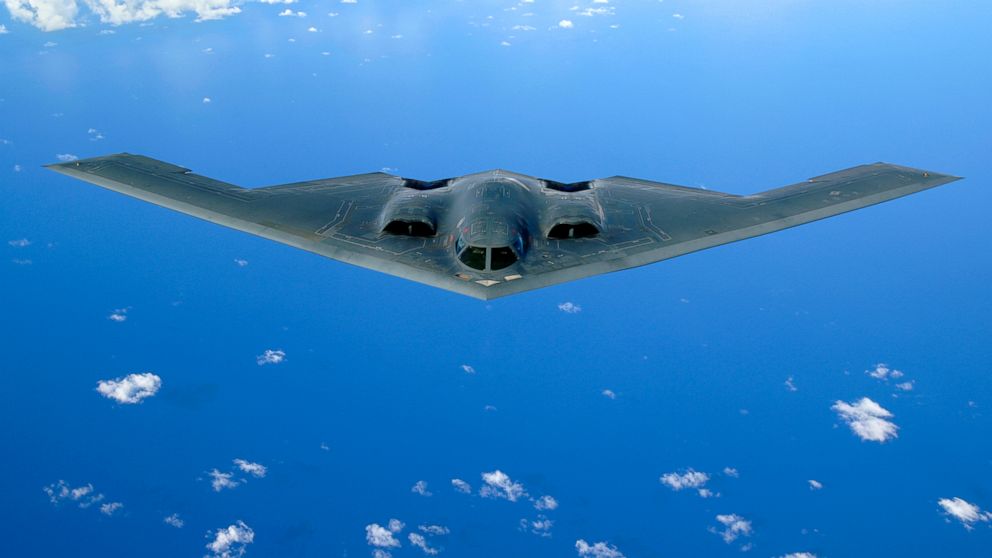 The airstrikes targeted 80 to 100 ISIS fighters in multiple camps south of the coastal city of Sirte, which was once an ISIS stronghold, an official told ABC News. The B-2 bombers dropped more than 100 munitions on the two camps.

Many of the ISIS fighters in the camps fled Sirte during a successful siege of the city last fall, according to another official. Militants were seen carrying weapons and mortars, wearing tactical vests and standing in formation.

"In conjunction with the Libyan government of national accord, the U.S. military conducted precision airstrikes Wednesday night destroying two ISIL camps 45 kilometers southwest of Sirte," Pentagon press secretary Peter Cook said in a statement, using another acronym for the group.

He said the ISIS fighters had fled to the remote desert camps "in order to reorganize, and they posed a security threat to Libya, the region and U.S. national interests."

The airstrikes were authorized by President Obama and are considered an extension of Operation Odyssey Lightning, the U.S. campaign that carried out almost 500 airstrikes against ISIS in Libya last fall.

Defense Secretary Ash Carter told reporters at a Pentagon briefing that more than 80 ISIS fighters were killed in the airstrikes. In addition to those who fled Sirte he said there were also individuals at the camps the U.S. believed were actively involved in planning attacks in Europe or were involved in previous attacks.

"We need to strike ISIL everywhere they show up" said Carter.

One counterterrorism official told ABC News there were "zero survivors" at the camps.

The ISIS operation in Libya has been a major concern for U.S. officials, who have worried it could become another ISIS safe haven as the group faces growing military pressure in Iraq and Syria. U.S. officials have said the number of ISIS fighters in Libya likely totals 1,000.

"The United States remains prepared to further support Libyan efforts to counter terrorist threats and to defeat ISIL in Libya," said Cook. "We are committed to maintaining pressure on ISIL and preventing them from establishing safe haven."

The airstrikes were the first time B-2 stealth bombers have been used in combat since March 2011, when they were used in the first wave of strikes in Libya during the NATO-led military intervention there.

In early December, ISIS was defeated in Sirte by local Libyan militias that surrounded the city over the summer.

From last August through December, U.S. manned and unmanned military aircraft conducted 495 airstrikes against the 1,000 ISIS fighters believed to be in the city. The Libyan militias, supporting Libya's government of national accord, were accompanied by American military advisers who coordinated the targeting of those airstrikes.

During the siege, U.S. officials estimated that hundreds of ISIS fighters fled Sirte to establish themselves elsewhere in the country.

The B-2's flew a 30-hour round trip mission from Whiteman Air Force Base in Missouri where the Air Force's fleet of 20 B-2 "Spirits" are based.

As for why the B-2 bomber was used for the mission Carter said "it was a decision made by the commanders. It was the best capability to use."

Cook explained to reporters that a benefit in using the B-2 for the airstrikes was its ability to loiter in the area after the strike.
Related topics:
abc newsnational
Copyright © 2021 ABC News Internet Ventures.
More Videos
From CNN Newsource affiliates
TOP STORIES