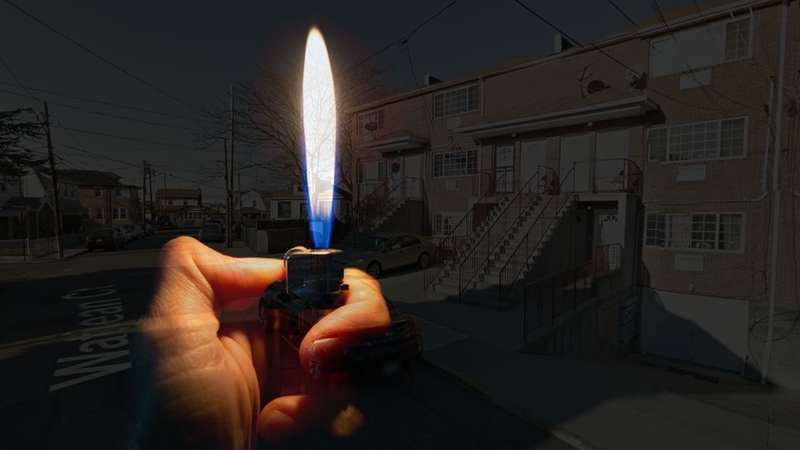 FAR ROCKAWAY, Queens (WABC) -- A 12-year-old boy from Queens is fighting for life after police said he took on a dangerous "challenge" that is making its rounds on social media.

The NYPD said the boy was at his home on Watjean Court in Far Rockaway Tuesday at about 8 p.m., trying to do the "fire challenge."

The challenge involves a person pouring flammable liquids on their bodies, lighting a match and posting the results on social media.

In this case, police said the boy doused himself with rubbing alcohol and lit himself on fire while standing in the bathroom.

The boy ran out of his house and neighbors ran over to help put out the fire.

"Just because people want to post things on YouTube, that makes people happy. It doesn't mean that you have to light yourself on fire," said Stefan Griffiths, a neighbor.

"I personally think that young people should seriously consider that their lives are something precious," said Samuel Hu, a neighbor.

He was rushed to the Nassau University Medical Center Burn Unit, where he has third degree burns on 40 percent of his body.

His family asked for privacy at the Watjean Court home, telling Eyewitness News through a family friend that he is doing much better at a nearby hospital.

The fire challenge is unfortunately becoming a trend on social media. A YouTube-based show talked about it in a recent episode. (WARNING: Video is extremely graphic)


A 15-year-old who lives nearby says like many of his friends, he did the fire challenge.

"I put it like around here, I grab the lighter, and the next thing my whole body burst in flames," the teen said.

Disturbingly, he said he would do it again because "it's fun".

"To have it filmed on YouTube so that people can watch this is a cry out for help. Everything is about this kind of media hype of attention and everybody wants you to know them, even if it could potentially cost them their lives," Dr. Stratyner said.
Related topics:
far rockawaynew york citysocial mediafire challenge
Copyright © 2021 WABC-TV. All Rights Reserved.
More Videos
From CNN Newsource affiliates
TOP STORIES