Dante Taylor gets life without parole in Sarah Goode murder 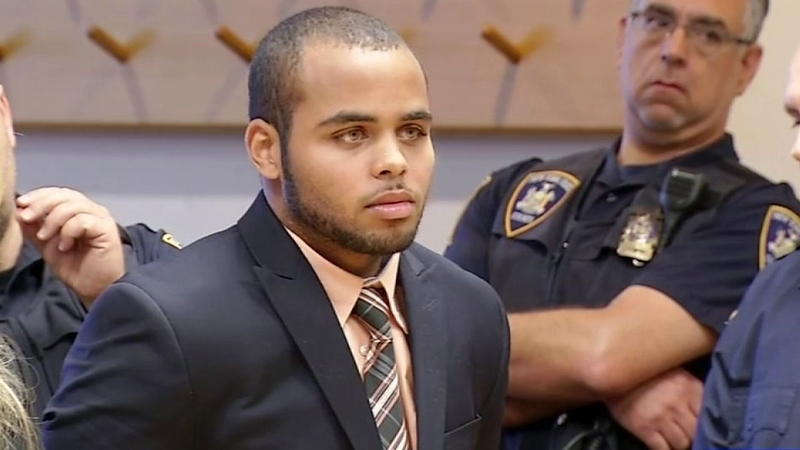 MEDFORD, New York (WABC) -- Dante Taylor, convicted of the murder of a 21-year-old Medford mother, was sentenced to life without the possibility of parole Friday.

A jury found Taylor, of Mastic, guilty of first and second degree murder, and attempted rape in the first degree in the death of Sarah Goode.

He was convicted on June 16.

Goode, 21, of Medford, was a medical technician and the single mother of a young daughter. She vanished after attending a party on June 7, 2014.

Goode was found by volunteer searchers in the woods near Camden Court in Medford on June 12. She had been raped and stabbed more than 40 times.

Investigators say Sarah had met Taylor at the party, and that he killed her in a fit of rage when she rejected his sexual advances.

Taylor was arrested in Vero Beach, Fla., a month later on an unrelated warrant.

It is the maximum sentence for the first-degree murder conviction.

"He set upon her with such brutality that he broke the tip of a cutting instrument off and it embedded in her skull," said prosecutor Janet Albertson.

Given the chance to speak, Taylor said nothing and the judge laced into him in handing down the sentence.

"You may make marks on the cell block on your walls in the cage in the cage in which you will live and they will have no significance," said State Supreme Court Judge John Collins. "You may circle dates on the calendar but they will mean nothing because there is no date for you to get out. There shall be no hope for you."
Related topics:
medfordmurdercourtlegal
Copyright © 2021 WABC-TV. All Rights Reserved.
TOP STORIES
Murder suspect arrested after exchanging gunfire with police in NYC
Nearly two-thirds of New Yorkers fully vaccinated against COVID
Bill Clinton released from UCI Medical Center after blood infection
AccuWeather: Major cooldown after round of severe storms
Video shows moments before, after killing of food delivery worker
Wake to be held for NJ woman allegedly killed by fleeing phone thief
5-year-old to donate money earned from pumpkin farming
Show More
SC teacher fired after student pulls weed gummies from prize box
COVID Update: FDA panel uncertain about mixing and matching vaccines
Evidence of water vapor found on 1 of Jupiter moons: NASA
Strike dodged with deal between film and TV crews, studios
US religious group says 17 missionaries kidnapped in Haiti
More TOP STORIES News