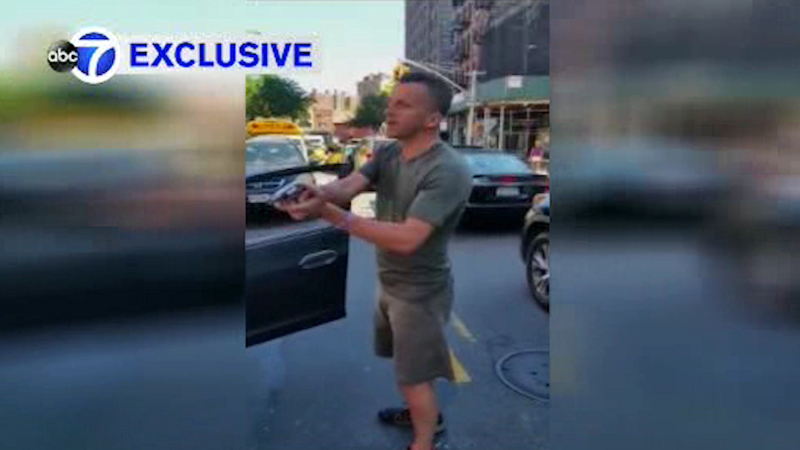 GREENWICH VILLAGE, Manhattan (WABC) -- An off-duty officer accused of pointing his gun at deliverymen on bicycles in Greenwich Village Monday.

The men say the confrontation started over the cop's car mirror, but the police are telling a very different story.

Still, the intense scene led to a school being put on lockdown.

"How are you going to pull a gun out in the middle of the street?" a bike messenger says in the video.

This is the heated and frightening exchange happened on Greenwich Avenue Monday afternoon as a motorist pulled his weapon in what appears to be a case of road rage.

The driver claims the messenger on bike smacked his window.

The biker's friends tell Eyewitness News the sergeant swerved into their space.

Everyone stopped and the confrontation began.

"You going to shoot him? He has no weapon," the man's friend said.

Thankfully no shots were fired. More officers and nearby firefighters arrived. The biker's friends say the sergeant never produced a badge.

"He did not even say he was a cop. Literally got out of car with his weapon drawn," a biker said.

"We kept asking him, identify yourself. He just wouldn't," another friend of the biker's said.

As word spread through the village that there was a gunman on the loose, a nearby elementary school was put on temporary lockdown instead of regular dismissal.

Eventually, the sergeant was allowed to drive away while the biker was arrested.

Officials claim he had an 8-inch ice pick which he used to lunge at the sergeant, except no such weapon was found.

Authorities say another biker took it.

The bikers argue that's a lie to justify pulling out his revolver.

"Were you four menacing him and coming at him a weapon?" Eyewitness News asked.

"Absolutely not," a friend said.

"He's definitely not guilty of any crimes," another friend said.

There were about four bikers riding together at the time, making a food delivery.

The only biker arrested was the one in front. His friends say the only weapons they pulled were their cell phones to capture the incident.