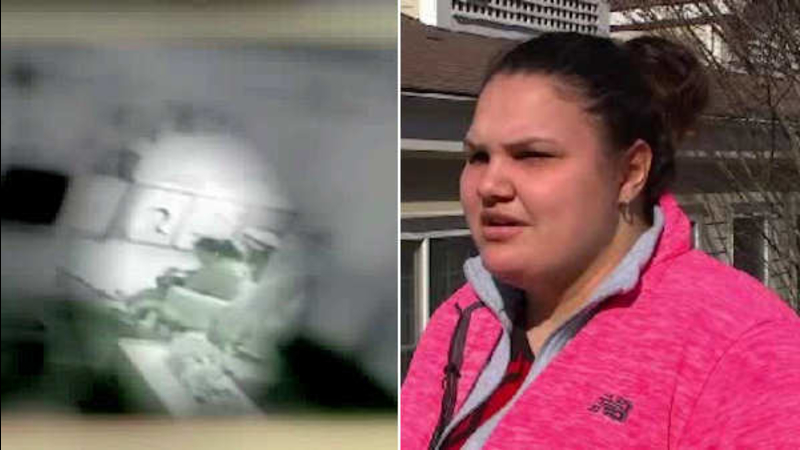 CARRBORO, North Carolina -- A mother is hoping police press charges against a daycare worker she says was caught on surveillance video breastfeeding her child without her permission.

Kaycee Oxendine recorded video from the security footage inside Carrboro Early School on Friday that shows a woman adjusting her top and bringing Oxendine's 3-month-old son to her chest to breastfeed him.

Oxendine works at the daycare as a pre-kindergarten teacher. On Friday, she said her son's teacher told her he was constipated. When another woman working in the nursery that day asked Oxendine if she could breastfeed the boy to see whether it would help, Oxendine told her no, twice.

"She said that she had a son and did I want her to put my child to her breast and breastfeed?" Oxendine recalled. "And I said no, that's nasty. We don't do things like that."

Next at 5 @ABC11_WTVD A mom is angry & disgusted after she says a daycare worker was caught breastfeeding her baby without her permission. pic.twitter.com/bYtuUs7q0w

Oxendine said moments after she left the room, video shows the daycare worker picking up her baby and breastfeeding him for several seconds. The woman stopped when another worker who was in the room at the time, stood up to leave.

"As a mom, you've taken something from me, because I wasn't able to defend my child," Oxendine said. "I wasn't there."

The daycare director, Daron Council, told sister station ABC11 that an employee reported what happened and that the worker who did the breastfeeding is no longer there. He said she usually worked at the Orange Chatham Early School, was licensed, and had been working in childcare for more than a decade.

Oxendine said the woman was fired on Friday, but she wants her to face criminal charges.

Later Friday evening, Oxendine rushed her baby to UNC Hospital because she said he became ill and was throwing up.

Her son was born prematurely, is lactose intolerant and can't have any milk products.

"To me, a criminal act was committed against him," she said. "Not only did you put your breast to my son, you also made my son sick because he's lactose. So you've put something in his body that his body can't digest."

Council said nothing like this had ever happened in one of the facilities. He said as soon as he found out what happened Friday, he reported it to DHHS and informed parents of the children who were under the woman's care that day.

Carrboro police said they were investigating the incident as misdemeanor child abuse. So far, no charges have been filed.