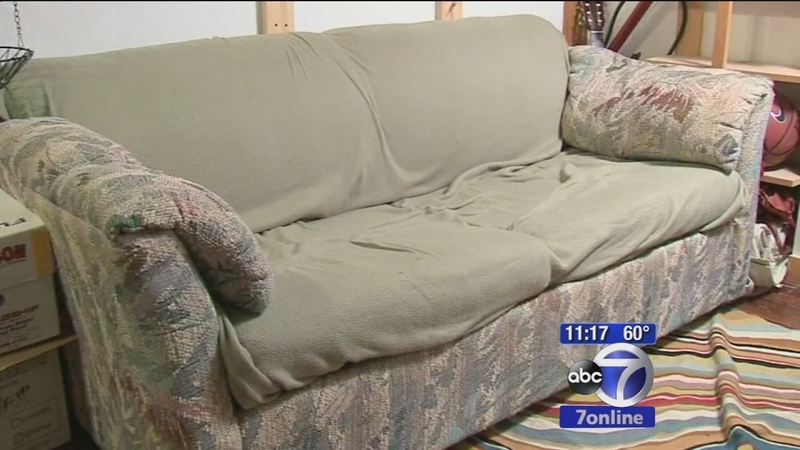 NEW PALTZ (WABC) --
They picked it up at a local thrift store, paying only $20 for the couch.

But inside, three college roomates found a stash full of money, totalling $40,000.

The students in New Paltz had a tough decision: do they keep the money or track down the owner who stole it?

The ugly and kind of uncomfortable couch came from the Salvation Army, and for a couple of months it just sat there in the tiny apartment, until Reese Werkhoven decided to find out why it was so lumpy.

"There's a zipper on the bottom, and he pulled out a bag, and we said it's either drugs or money, and we freak out and it's a stack of hundreds and fifties," said student Lara Russo.

"So we pulled it out of the couch and we're shaking and the first thing Lara said is 'lock the doors'," said Reese.

"Next door they actually thought that we won the lottery. Our walls are really thin between our wall and their wall," said social worker Callie Guasti.

"At first we found the money but there was no name or anything, and we're bugging out, like, what kind of boat are we going to get, where are we going," said Reese.

"I wanted to go on an epic road trip around the United States, that would be awesome," said Lara.

Envelope by envelope the money was piling up, and the Salvation Army doesn't keep records on this sort of thing, so they wouldn't have known who donated that couch. The three admit they were thinking about all the cool things they could do with that money, until they found the deposit slip. And then it became a whole different moral issue.

But what's most remarkable about the three, who are all from New York City and went to the same high school, is that there wasn't a question or even a debate. The money wasn't theirs.

"We were always pretty clear, if we could find her and she was alive, it was her money, no matter what the circumstances," Lara said.

They tracked down the woman whose name was on the envelope. She is 91 years old and had recently broken a hip. She didn't trust banks, and her kids donated the couch when she was in the hospital. She was a widow.

"That's one of the things she said, 'I feel like this is a gift from my husband, he's looking down on me and that's part of the reason you guys came here', which was so touching," said Callie.

Three kids, whose collective savings add up to, well, they don't have any savings. But they sure do have an abundance of goodwill.

"It wasn't a debate, we immediately reached a consensus that this is her money," said Reese.