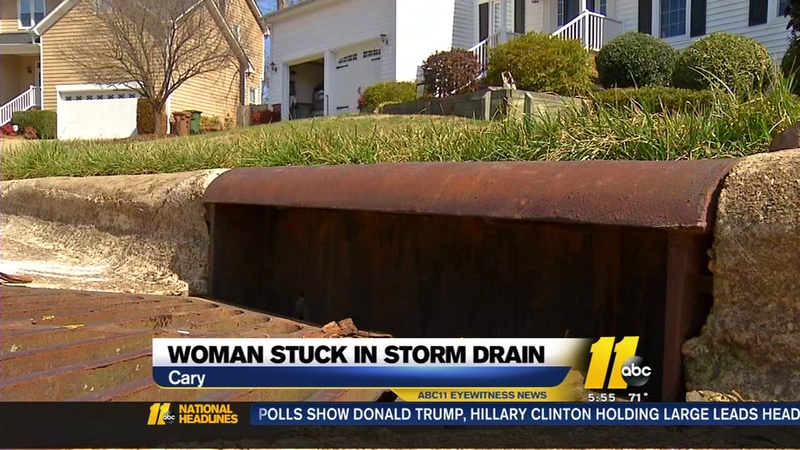 CARY N.C. -- Diane Pimpinello said she heard an echoing meowing sound outside her house and saw a cat stuck in the storm drain. She called animal control, but grew anxious waiting, and that's when she decided to crawl into the storm drain and follow after it.

Listen to the 911 call to animal control here.

Pimpinello crawled through the drain - which she describes as a tunnel maze, only a couple of feet tall. She was afraid the cat was hurt, or stuck, but she, not the little feline would be the one stuck in the pipes below.

"I said 'well I got to get him, I got to get him. He's hurt,'" Pimpinello said. "So I started crawling through all the tunnels and it's like a great big maze down there, and I don't know where I was going but I was determined I was going to do everything to save this little guy."

A neighbor called 911 after Pimpinello ended up stuck in the neighborhood outside her cul-de-sac, unable to lift the heavy lid off the drain.

"I got a few little bumps and bruises but I'm OK," she said. " I know that the firemen I came to get me out of the drain they said don't ever do that again."

Listen to her neighbor's 911 call for rescue here.

Pimpinello said she is an avid animal lover. She rescued her two dogs and two cats from animal shelters, and she and her neighbor, Rose Marie (a pet sitter), have both rescued several stranded baby squirrels after the most recent severe weather storm, and a stranded dog off Davis Drive during busy weekend traffic.

Pimpinello said she couldn't stand the thought of sitting by if an animal might be hurt.

"I would save every animal on this earth if I could," she said.

Even though she was not able to get to the cat in her attempt to rescue it, neighbors tell us the cat has since been rescued by its owners.