WABC
By Candace McCowan
SPRINGFIELD GARDENS, Queens (WABC) -- Police are trying to track down the drivers involved in three deadly hit-and-runs, two in Brooklyn and one in Queens.

The first crash happened last Wednesday, when 39-year-old Evedette Sanchez was struck by a vehicle at the intersection of Flatlands Avenue and Louisiana Avenue in Canarsie.

She was pronounced dead at Brookdale Hospital.

Investigators have released pictures of the green Chevrolet Suburban with oversize rims believed to have hit her before fleeing the scene: 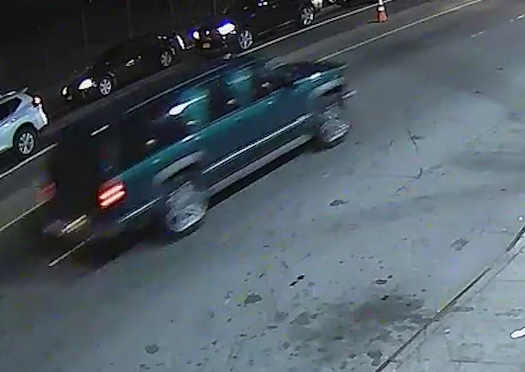 The driver fled the location north bound on Louisiana Avenue to an unknown location, police say.

Police say the 52-year-old victim was trying to cross South Conduit Avenue when he was struck. He was pronounced dead at the scene and has been identified as Thomas Bradley Jr.

Investigators describe the vehicle as a late model red Ford. The vehicle is believed to have front end damage and damage to a mirror.

The second incident happened shortly after 5 a.m. at the intersection of Conduit Boulevard and Crescent Street in Cypress Hills, Brooklyn.

Police say a 53-year-old man was attempting to cross Conduit Boulevard at Crescent Street when he was struck by a 2007 black Lexus sedan which was traveling northbound on Conduit Blvd.

The out-of-control vehicle then struck a guardrail, crashing on the scene.

The driver exited the car and fled on foot, police say.