Sgt. Hugh Barry was charged in the fatal shooting of Deborah Danner inside her home in the Castle Hill section last October.

He surrendered in Bronx Criminal Court Wednesday morning and was arraigned in the afternoon. 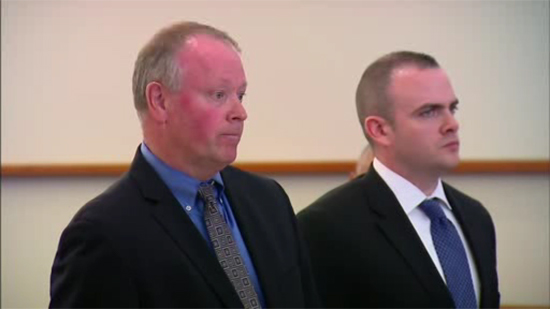 Barry, 31, is a second-generation police officer who has spent eight years on the force.

Danner has a history of mental illness and was shot while charging at Barry with a baseball bat in her apartment.

Barry and other officers had managed to convince the woman to drop a pair of scissors she was holding. When she grabbed a wooden bat and ran at Barry, he fired.

Barry was carrying a Taser but fired his service weapon instead.

That was the argument presented to the grand jury that led to the indictment for Sgt. Barry.

"My client responded to an EDP call where he was confronted with an emotional disturbed person, who by everyone's account was armed with a deadly weapon, a bat," said defense attorney Andrew Quinn.

The New York City Sergeants Benevolent Association said it was outraged by the indictment and said Barry has an exemplary record. The union called it a gross misuse of the judicial system, saying Barry acted legally and was afraid for his life.

"There is no way of telling what a person with mental illness is going to do and we can sit and second guess," said SBA President Ed Mullins. "We can say, why didn't he Taser, why didn't he close the door. Officers risk their lives going into these situations. It's a split-second decision. I firmly believe in the weeks and months ahead that you will see Sgt. Barry acquitted of all charges.""

"The loss of Deborah Danner was a tragedy felt deeply by our city," said Mayor Bill de Blasio. "Now that the grand jury has made its decision, we have full faith in the district attorney to lead a fair and thorough prosecution."

Rev. Al Sharpton released a statement calling the indictment "a good step in a long walk toward justice. We will monitor selection of the jury, the trial, and the verdict."

Bronx Borough President Ruben Diaz Jr. said it marked progress in "addressing an issue that has been long neglected, and that is how to deal with our mentally ill residents in volatile situations."

"That's not how it's supposed to go. It's not how we train," O'Neill said the morning after the shooting.

Relatives have said Danner had been ill since her college years. She had done some computer-related work at one point and was a book-lover and artist, often sketching the people around her, a former lawyer of hers has said.

In a searing, eloquent 2012 essay on living with schizophrenia, she agonized over the deaths of mentally ill people like her at the hands of police.

"We are all aware of the all too frequent news stories about the mentally ill who come up against law enforcement instead of mental health professionals and end up dead," she wrote in the essay, which she had given to her attorney.

If convicted on the top charge, Barry could face life in prison.

Darla Miles reports on the indictment of an NYPD sergeant.