Excavator falls into building in Bedford-Stuyvesant

WABC
BROOKLYN, N.Y. (WABC) -- Residents on Monroe Street in Bedford-Stuyvesant have returned to their homes after an excavator fell into a residential building Friday afternoon.

Around 2:15 p.m., officials responded to a 911 call reporting an excavator at 726 Monroe St., leaning on another building. A contractor had been working on demolition when the excavator fell into the basement. The piece of equipment started leaning against 728 Monroe St., a three-story, three-unit apartment building.

According to the FDNY, crews were tearing down the house next door when the excavator toppled over onto the apartment building. Residents of 728 Monroe St., were temporarily evacuated. 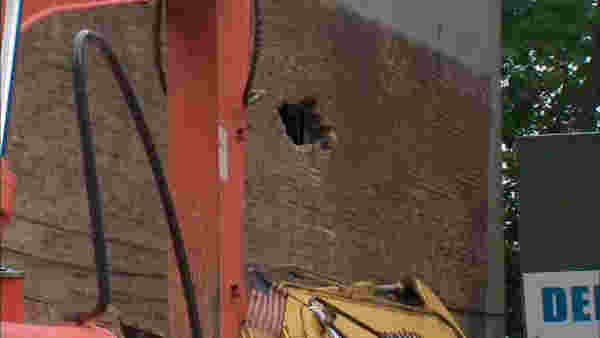 Excavator falls in Brooklyn, crashes into building
An excavator that was part of a demolition hit a building at 728 Monroe St., in Bedford-Stuyvesant.

No injuries were reported. The excavator was removed from the scene and workers on Friday night secured the fence and sidewalk. Monroe Street was closed from Patchen Avenue to Malcolm Boulevard.

The three families who live inside had to wait nearly nine hours to find out if their home was OK.

"It was scary ... my daughter was scared," said tenant Sharene Crespo. The 13-year-old girl was sleeping when the heavy equipment came crashing into her bedroom Friday morning.

"She was just shaken up by it," said Crespo.

The force caused the sheet rock to buckle, and when it was removed, a gaping hole to outside was visible.

In addition to the New York City Fire Department, the city's Department of Buildings also responded to the scene.

A full stop-work order was issued and the city Department of Buildings issued violations for failure to safeguard persons and property by construction operation; failure to conform to approved plans and documents; and for a sign with advertising posted at the site.