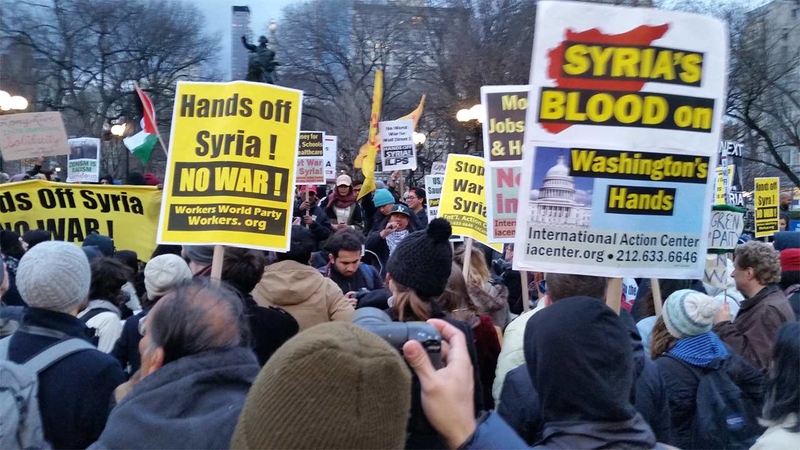 UNION SQUARE, Manhattan (WABC) -- President Trump's decision to hit a Syrian air base with missiles is dividing Americans, but this time it's not along party lines.

In fact, at Friday night's rallies there were splits going so many ways, it was hard to keep track, who was for and against what exactly.

Hundreds of protesters brought traffic to a standstill by Union Square, even leading to a handful of arrests.

The group's main message was say no to war, and no to U.S. intervention.

"All of these humanitarian wars that it has waged for hundreds of years have never brought about peace and democracy," said Nina Macapimlac, a protester. "So bombing other countries to bring peace is a contradiction."

Hours before the rally at Union Square, there was a protest at Trump Tower.

There were roughly a hundred demonstrators there marching down 5th Avenue, colliding with the other group at Union Square.

And while there seems to be a lot in common with the two groups, some say they have major differences.
"I think that some of these people think that Assad is some sort of progressive. That Putin and Assad are some sort of counterweight to the U.S. and I don't think they are," said Charlie Post, a protester.

Because this is New York, there were also plenty of other opinions floating through these dueling protests.

There was one man who said he doesn't fully agree with either of them.

"This small sort of splinter group here, which is to their credit anti-Assad as well as opposing U.S. intervention. And then you have the main organizers who are extremely pro-Assad. And I consider the main organizers at least hypocritical in the extreme," said Bill Weinberg, a protester.

Did you follow all that? To simplify things here's what everyone protesting had in common.