WABC
EAST MORICHES (WABC) -- A pilot who landed his disabled plane on a highway for the second time in eight days said Friday he's lucky to have escaped unhurt and thankful he didn't hit anyone.

Frank Fierro, 75, said he was "shaking" as he glided the single-engine Challenger ultralight plane to a landing on the eastbound lanes of Sunrise Highway just before 1 p.m. 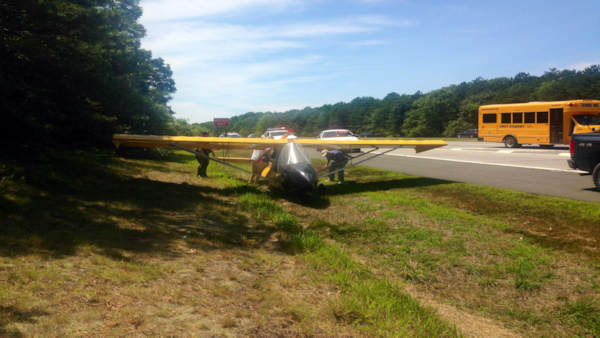 Fierro landed the same plane in a nearby median on July 10. He has been flying planes for 45 years as an instructor and is well known in the local flying community.

Police said Fierro was flying the plane for the first time since last week's incident.

Both times it developed engine trouble, forcing Fierro to find a makeshift runway before he could get back to Spadaro Airport in East Moriches.

"I was hoping to stop in the same spot, but on the median there was a truck," Fierro said. "I was hoping they would move when they didn't I snapped the controls and moved over to the right and went on the highway."

Fierro said he hesitated to land on the highway, a heavily traveled east-west thoroughfare from the New York suburbs to the Hamptons on the south shore of Long Island.

"The last thing I would want to do is hit a family in a car," he said. "A beautiful family with children stopped right behind me."

Fierro said despite the close calls he'll keep flying. He cited Chesley Sullenberger, the pilot who landed a passenger jet on New York's Hudson River after a bird struck an engine, as inspiration.

Plus, he said, he's got luck on his side and, possibly, a higher power for a co-pilot.

"I think someone up there is paying attention to me," Fierro said. "And that means a lot."

Eyewitness News asked the FAA if they would take any action against the pilot, an they said that will be determined after they investigate.