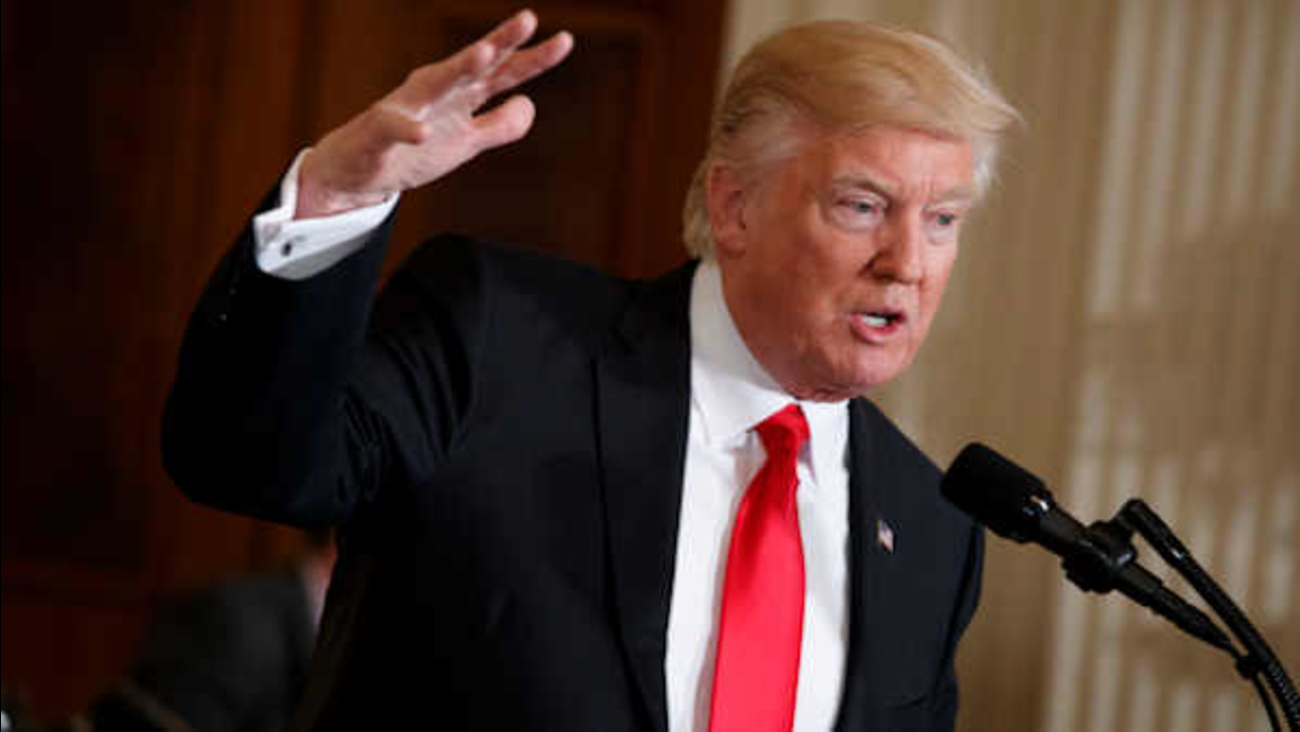 AP
WASHINGTON -- President Donald Trump had an hourlong discussion Saturday with Russian President Vladimir Putin - the first since Trump assumed office last week - raising questions over the fate of U.S. sanctions against Moscow and whether the two will look to enhance military cooperation against the Islamic State group.

The White House provided a thin readout on the call between the two leaders, saying it was "a significant start to improving the relationship between the United States and Russia that is in need of repair."

The two leaders discussed "a range in topics from mutual cooperation in defeating ISIS to efforts in working together to achieve more peace throughout the world including Syria," the White House statement said, using an acronym for the militant group.

A White House official later said sanctions did not come up in Saturday's call between Trump and Putin. The official said Putin brought up several times that Islamic terrorism was a "common foe" for the U.S. and Russia. The official was not authorized to disclose details of the call by name and insisted on anonymity.

Contrary to statements from the White House, the Kremlin said that the two leaders addressed the importance of "restoring mutually beneficial trade and economic ties between business circles of the two countries."

The Kremlin also said that Putin and Trump spoke in particular about international issues, including the fight against terrorism, the Arab-Israeli conflict, Iran's nuclear program, the situation on the Korean peninsula and the Ukraine crisis.

Moscow has applauded Trump's promises to rebuild U.S.-Russian relations, which have been pushed to their worst level since the Cold War by the Ukraine crisis, war in Syria and allegations of Russian meddling in U.S. elections. Trump signed a presidential memorandum on the plan to defeat the Islamic State group Saturday, including in it the possibility of teaming up with "new coalition partners," suggesting that pairing up with Russia on counterterrorism issues isn't off the table.

Trump was noncommittal about whether he was considering lifting the economic sanctions ahead of the call, telling reporters Friday: "We'll see what happens. As far as the sanctions, very early to be talking about that."

Shortly before leaving office, President Barack Obama also ordered sanctions on Russian spy agencies, closed two Russian compounds in the United States and expelled 35 diplomats that he said were really spies. These sanctions followed an assessment by U.S. intelligence that Moscow meddled in the 2016 election to help Trump become president.

British Prime Minister Theresa May, whose country - as part of the European Union - also has punished Russia for its provocations in Ukraine, voiced the view of many in Europe, telling reporters in Washington on Friday: "We believe the sanctions should continue."

Two Republican senators - Arizona's John McCain, chairman of the Armed Services Committee, and Ohio's Rob Portman, a member of the Foreign Relations Committee -warned the White House about easing any punishments on Moscow and they pledged to turn the sanctions into law.

"I hope President Trump will put an end to this speculation and reject such a reckless course," McCain said in a statement. "If he does not, I will work with my colleagues to codify sanctions against Russia into law."

Portman said lifting the sanctions "for any reason other than a change in the behavior that led to those sanctions in the first place would send a dangerous message to a world already questioning the value of American leadership and the credibility of our commitments after eight years of Obama administration policies."

McCain has emerged as a frequent critic of Trump among Capitol Hill Republicans. He takes a dim view of trying to reset relations with Moscow and says Trump should remember that Putin is "a murderer and a thug who seeks to undermine American national security interests at every turn."

"For our commander in chief to think otherwise would be naive and dangerous," McCain said.

McCain and Portman are part of a bipartisan group of senators who have introduced legislation designed to go beyond the punishments against Russia already levied by Obama and to demonstrate to Trump that forcefully responding to Moscow's meddling isn't a partisan issue.

The bill would impose mandatory visa bans and freeze the financial assets of anyone who carries out cyberattacks against public or private computer systems and democratic institutions.