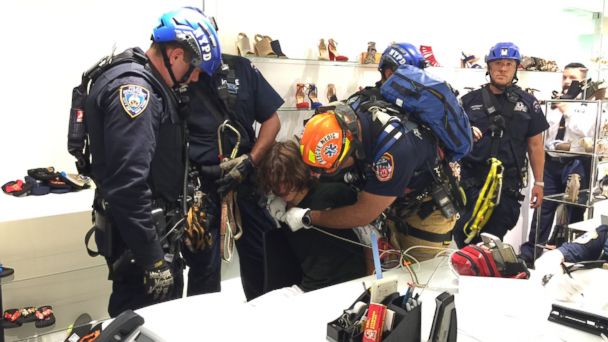 The 20-year-old man who scaled Trump Tower in Midtown Manhattan Wednesday afternoon wanted to get Donald Trump's attention for a "personal meeting," according to the NYPD.

The climber, an independent researcher from Virginia who traveled to New York City yesterday and stayed at a local hotel, had the "sole intention" to meet Trump, not to hurt the candidate, police said. Cops were initially alerted to him climbing the building around 3:30 p.m., and it took more than three hours to bring him into custody, grabbing him through a window that had been removed.

Once in custody, the man went in peacefully but didn't have much to say once they got him inside, police said. He was removed from Trump Tower on a stretcher and taken to Bellevue Hospital, where he will be psychologically evaluated, police said. He will be placed under arrest, but the appropriate charges against him have yet to be determined, police said.

According to cops, the NYPD was in contact with the Secret Service.

The man's backpack contained various forms of identification because the man now goes by a different name, police said. His identity has not been determined.

The climber used a contraption made up of five suction cups to scale the building for more than three hours. The suction cups could have been purchased from any store that sells mountain climbing equipment, police said.

His climb started on the fifth floor atrium, which is accessible to the public.

Responding officers yanked the man into the building around 6:35 p.m. after knocking out a full window pane on the 21st floor. NYPD emergency services had been trying to "safely isolate" him by making it difficult for him to continue climbing, an NYPD official said. Throughout the climb, police had been negotiating with the man but were reluctant to do anything that could cause him to fall, the official said.

"He wanted to climb to the top so he could speak with Trump," said Chief Vincent Giordano. "When he got to the point where he was on the pane which would have cracked if he applied all his weight, he was taken in."

Before pulling him into the building, police lowered safety lines and told the climber that he should lock in. When he proceeded to ignore those instructions, the officers found an "opportune moment" and grabbed him, police said.

"Sir, you need to come with me," said the officer who grabbed the man.

As the scene unfolded, a crowd formed below on Madison Avenue, with some people cheering and whistling for him. When the climber slipped, gasps could be heard.

Traffic was shut down on Fifth Avenue during the incident.