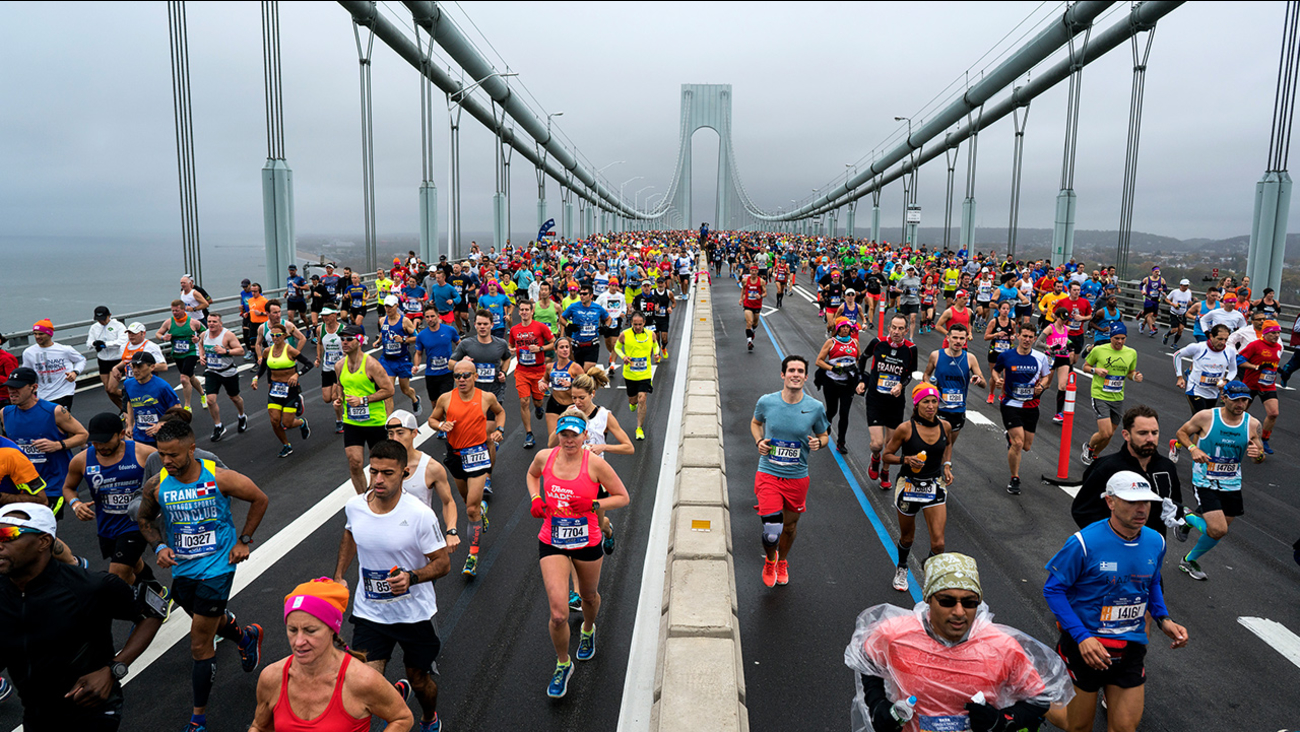 NEW YORK (WABC) -- The TCS New York City Marathon course is completely closed to vehicular traffic during the race. A schedule of street and bridge closures for the 2018 race along with subway and bus information is below.

Sweep buses will follow the marathon route at a 6 1/2-hour marathon pace, roughly 15 minutes per mile, after the final wave start. After the sweep buses pass, and it's deemed by city authorities, the streets will reopen to traffic.

RELATED: What you need to know about the TCS NYC Marathon 2018

Note: NO buses will be allowed to cross 5th Avenue during the race.

Candace McCowan reports on the marathon security from Central Park.

MTA Bridges & Tunnels
The Verrazzano-Narrows Bridge will be closed to all vehicular traffic on Sunday, Nov. 4 between 7 a.m. and approximately 3 p.m. for the TCS New York City Marathon. Motorists traveling to Brooklyn or Staten Island via the Verrazzano-Narrows Bridge must use alternate routes.
In addition, on Saturday, Nov. 3, the upper level of the bridge will be closed to traffic in both directions beginning at 11 p.m. to allow for roadway preparation. Over-dimensional vehicles and vehicles containing hazardous materials will not be permitted to cross the bridge in either direction once that closure takes place.

The Bay Street and Lily Pond Avenue exits in Staten Island will close at 3 a.m. on Sun., Nov. 4 and reopen at around 3 p.m.
Motorists can call the Verrazzano-Narrows Marathon Traffic Hotline at 718-692-5656 to hear information about the closures.

MTA NYC Transit Subways
The 2018 TCS NYC Marathon will kick off on Sunday, Nov. 4, and MTA New York City Transit's subways and buses will get you to the event from all parts of the city. Marathon revelers can use the MTA's customized Marathon Subway Map on the web. It highlights pre-race, runner specific activities and events, as well as a number of great viewing locations throughout the city on Marathon Sunday. The map also lists a number of tools and tips to assist customers when traveling.

New York City Transit will stay in contact with the New York Road Runners Club, sharing information regarding any street closures and/or subway diversions that may arise.

The following stations/subway lines may experience higher ridership volumes than usual: South Ferry , Whitehall St, Bowling Green, 42 St-Bryant Park and uptown, 42 St-Grand Central, 5 Av, 59 St-Columbus Circle, 72 St, 81 St-Museum of Natural History, and 86 St. In order to prevent overcrowding on stairways and platforms at subway stations, some stairways may be designated as "entrance or exit only." Additional NYC Transit personnel will be available to assist customers at these subway locations.

Due ongoing critical maintenance and Subway Action Plan work this weekend, some trains may be rerouted or suspended. In the Bronx, uptown trains skip 155 St, 161 St-Yankee Stadium, and 170 St. In Brooklyn, free shuttle buses replace trains between Church Av and Coney Island-Stillwell Av.

Brooklyn-bound trains are rerouted via the local from 71 Av to Canal St, then via the Jay St-MetroTech.
Manhattan-bound trains run express from Kings Hwy to Prospect Park, and trains replace the between Atlantic Av-Barclays Ctr and Whitehall St. In Manhattan, downtown trains run express from 59 St-Columbus Circle to Canal St, and uptown trains are rerouted via the line from Jay St-MetroTech to W 4 St-Wash Sq.
In Queens, free shuttle buses replace trains between Briarwood and Jamaica Center-Parsons/Archer.

In addition to the MYmta smartphone app, participants and spectators can check www.mta.info and check out the "Weekender" tab located within the Service Status Menu for Current Service Status on any MTA mode of travel that they plan to use. Remember that TripPlanner+ provides travel information that takes weekend service diversions into account. Customers using bus routes in the five boroughs can also use MTA Bus Time to track real-time bus positions and gauge arrival times. For more information on the TCS New York City Marathon, click here: https://www.tcsnycmarathon.org/