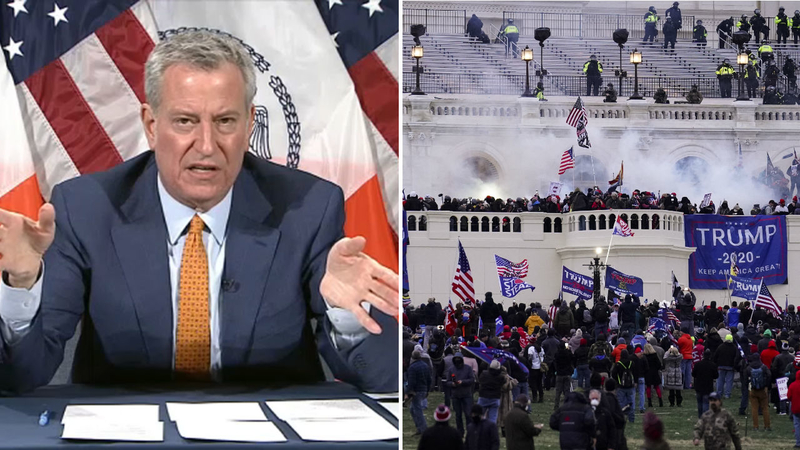 NEW YORK (WABC) -- Mayor Bill de Blasio is taking a hard line for any New York City worker who took part in the siege at the U.S. Capitol last week.

"Let me lay down the law," de Blasio said Monday. "Any NYC employee, any part of the city government who participated in an attack in our democratic institutions, participated an insurrection at the capitol, will be terminated. Period."

De Blasio said if there is proof of anyone attacking the U.S. government, they will no long be working for the city any longer.

"I think the folks who went into the Capitol, threatened lives, destroyed property, did not follow the instructions of police officers, any of those things, do not belong in NYC public service. Period," de Blasio said. "Of course there will be due process, but let's face it, this was an insurrection against our government, this was not a peaceful protest. This is a group of people who attacked our Congress, attacked it to disrupt the presidential vote count. This is unbelievable. It's not even close, anyone who participated in that, anyone who stormed that building trying to disrupt the workings of government, should not be allowed to serve in government."

The Police Commissioner said the NYPD is looking into reports of at least one NYPD officer who may have been in the Capitol during the riot.

The FDNY is investigating at least one current and one retired firefighter who may have been present.

"The Department received anonymous allegations that active or retired members were present at the events at the United States Capitol on January 6 and, as required, has provided that information to the FBI," FDNY spokesman Frank Dwyer said.

Meanwhile, a New York state employee was identified as one the trespassers involved with the Capitol riot. Metro North employee Will Pepe was recognized by both colleagues and management from a photo distributed by law enforcement.

MTA management moved swiftly, and Pepe was suspended without pay and charges are expected to be filed this week.