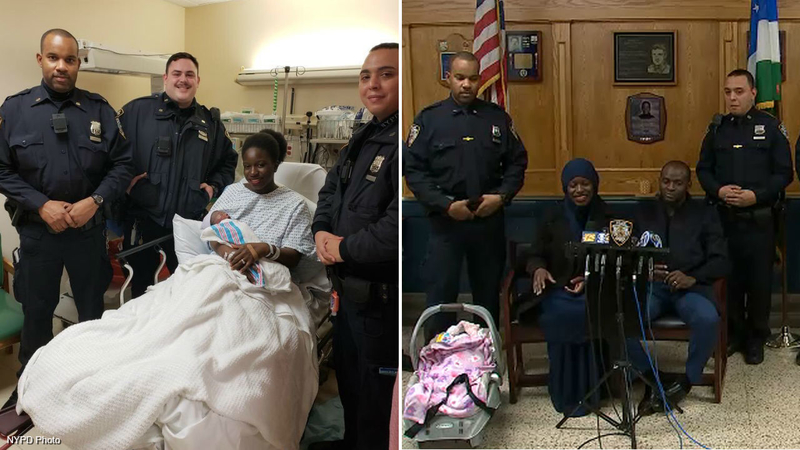 FORDHAM, Bronx (WABC) -- Three NYPD police officers were in the right place at the right time to help a Bronx woman deliver a healthy baby girl this week.

Things didn't quite go as planned for Oumy Bajaha, who went into labor in her Bronx apartment on Monday evening while her husband was stuck in traffic.

When police received a 911 call that a woman was in labor around 5:30 p.m. Monday, the three officers from the 46th Precinct beat EMS to the scene.

They found the woman was already in labor, so officers told her to relax, breathe and push when she was ready.

"When mom was ready she pushed, we were there with clean towels, ready to accept the baby," Officer Michael Higgins said. "The baby came out, a beautiful baby girl, we were right there to clean the baby up and wrap her in a towel and make sure she was OK."

Higgins said both mom and baby, born at 7 pounds 8 ounces, were great after the delivery and it wasn't long after that before EMS arrived to take them to the hospital.

The officers were reunited with Bajaha and her baby on Wednesday afternoon where she had the chance to thank them for being so amazing.

Bajaha said she was initially terrified to give birth at home because she wouldn't have known what to do if the baby wasn't breathing. Right after the police came, Bajaha said they gave her hope and reassurance.

"My anxiety level went down a little bit and I was feeling a little bit better," Bajaha said. "I felt like I think it is safe to deliver here, I have a whole bunch of people around me, so If I do deliver, I think the baby is going to be OK."

The little girl was named Zainab, after her maternal grandmother.

As it turns out, being accidentally born in an apartment isn't all that unusual for Bajaha and her family.