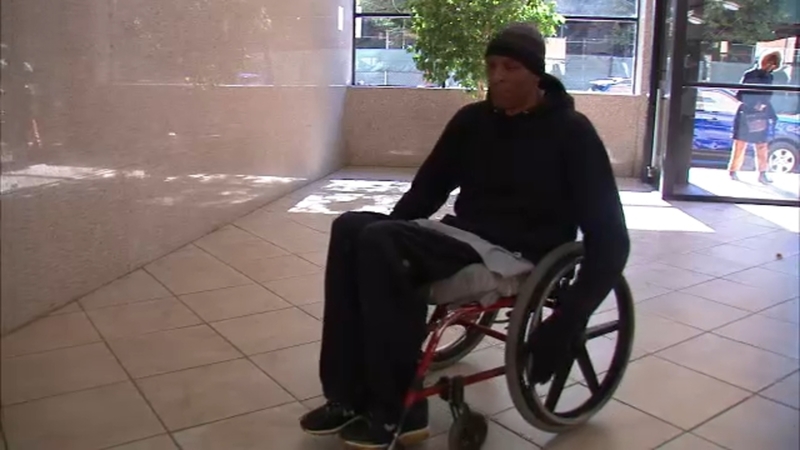 One of the plaintiffs in the case said he was arrested on drug charges which were ultimately dropped, held by police for over 30 hours, and abandoned in a communal holding cell, deprived of his wheelchair and unable to move.

"It's less than being treated like a human," Baron Walker said of the ordeal. "It's like, 'You really don't care.'"

Walker said he was unable to protect himself, access a toilet, or move beyond the distance he could pull himself using his arms. If another inmate hadn't brought him a sandwich, Walker said he also would have been unable to access any food during the time he was held.

"I'm already at a loss because I'm in a wheelchair and then you are going to take my wheelchair from me and sit me on the floor," Walker said. "It's not fair."

Once Walker was released he called an attorney specializing in civil rights cases, Gillian Cassell-Stiga.

Thursday the state organization empowered by Congress to investigate allegations of abuse and protect people with disabilities, Disability Rights New York, joined in that lawsuit and refiled the case to include allegations of ADA violations city-wide.

"It is the responsibility of the NYPD to ensure the safety of all detainees in their custody," said DRNY Executive Director Tim Clune. "NYPD has had 28 years to make all of their facilities accessible to people with disabilities."

"We are hoping the City of New York will realize this treatment cannot go on a day longer and will immediately take corrective action," added Cassell-Stiga.

In court documents tied to the initial lawsuit filed by Cassell-Stiga, the city defended itself, arguing the total number of people arrested requiring a wheelchair is small.

"According to Criminal Justice Bureau data, from February 29, 2016, through May 31, 2018, approximately 23 individuals entered Brooklyn Central Booking custody utilizing wheelchairs who were arrested by NYPD for this 26 month period," wrote a City of New York Law Department representative. "Plaintiff is therefore unlikely to establish numerosity."

Walker's attorneys argue the small number of people arrested requiring wheelchairs in no way justifies the treatment Walker and others like him have received.

"One is too many, even one is too many. They should not be taking wheelchairs away from any arrestee," Cassell-Stiga said. "It's across the city hundreds of individuals with mobility disabilities who are being arrested and put them in a system that treats them in a despicably inhumane way."

In a response to the initial class-action complaint filed by Cassell-Stiga on behalf of Walker, the city denied most of the allegations or denied having "information sufficient to form a belief as to the truth of the allegations."

In response to multiple requests by Eyewitness News that the city respond to the latest allegations and lawsuit filed in the United States District Court, Eastern District of New York, a representative for the city Legal Department wrote in a statement received after the initial airing of the Eyewitness News exclusive report on this lawsuit, "We will review the complaint."