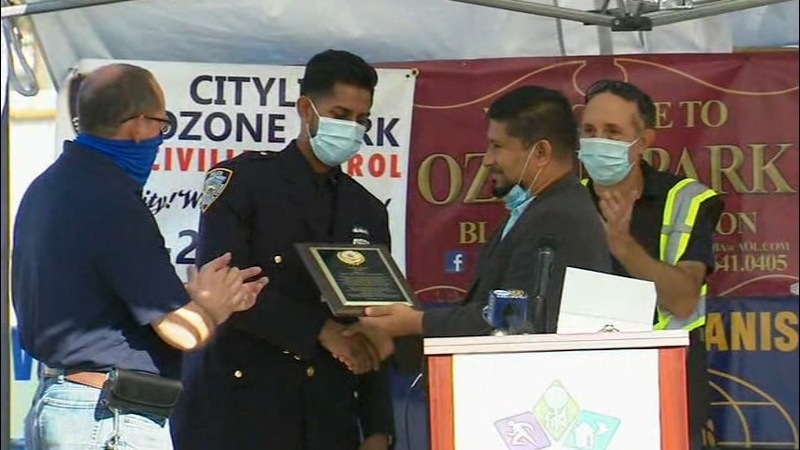 OZONE PARK, Queens (WABC) -- An NYPD officer who was off duty when he tackled a man who had allegedly shot and killed a worker at a Queens smoke shop was honored Saturday.

The 27-year-old was inside the Craft Beer Lotto Cigar last month when police say 63-year-old Steven Cohen barged in and shot 26-year-old Mohmediyan Tarwala before aiming the gun at another worker.

That's when Maharaj made the split-second decision to risk his own life and tackle Cohen to the ground.

Cohen, who officers say is homeless, is charged with murder.

Police say he initially entered the business and was pushed out by Tarwala and another employee after he began acting unruly.

Cohen left and went across the street to a beer shop and asked a worker, Chris Hanlon, for help and to call 911. Hanlon, who had no idea the man had been kicked out of the convenience store, said Cohen didn't look good.

"He looked like he was in the middle of a medical emergency, like a stroke," he said. "I called and turned around, and he walked off."

Also Read: Air Force vet honored for serving her country and her selfless work at home in New Jersey

Authorities say Cohen returned to the store and shot Tarwala once in the stomach. Police say he also fired at the second employee, a 32-year-old, who was not hit.

Tarwala, known as Iyan to his friends, was rushed to Jamaica Hospital Medical Center, where he died of his injuries.