3 charged in instances of NYPD officers doused with water in Manhattan, Brooklyn 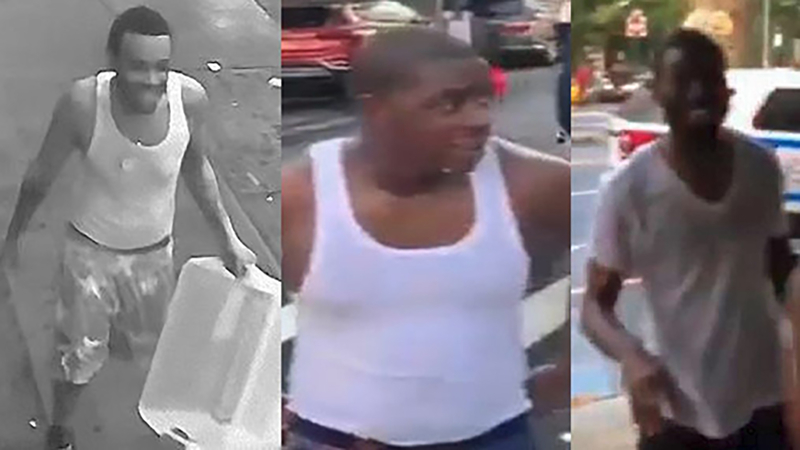 3 charged in instances of NYPD officers doused with water in Manhattan, Brooklyn

NEW YORK (WABC) -- Police on Wednesday announced that three men have been arrested in connection with incidents of on-duty NYPD officers being drenched with water.

The officers had been sent to break up unruly gatherings around open fire hydrants during the heat wave in Brownsville and Harlem - but they got soaked themselves as onlookers jeered.

Clips of the incidents were widely circulated on social media.

In one of the videos, an officer making an arrest of a suspect in Harlem appears to get hit in the head with a red plastic bucket as he and his partner are splashed with water.

Police said 23-year-old Isaiah Scott and 28-year-old Chad Boden are facing charges in the incident, but not for throwing water on the officers. Instead, they are charged with harassment, disorderly conduct and criminal mischief for allegedly throwing water on a female friend and damaging her cell phone.

That water tossing immediately preceded the officer being struck by the bucket, but police are still searching for the person who threw it.

The second video, from Brownsville, Brooklyn, appears to involve officers who were deliberately cooling down with residents. The two officers were getting repeatedly doused as they walked down the street looking sheepish as a woman's voice in the background is heard saying, "Oh, they violated them."

Courtney Thompson, 28, a reputed gang member on probation with 20 prior arrests, surrendered to detectives at the 73rd Precinct. He is charged with obstructing governmental administration, criminal mischief, disorderly conduct, harassment, and criminal tampering for damaging the officer's equipment.

Police released a photo of the man wanted for throwing the bucket at the officer in Harlem.

#NEW #NYPD looking for this guy. Detectives say he’s one who tossed water and a bucket at cops in Harlem as they arrested another man for a prior shooting Do u know him ? Call police @abc7ny #abc7ny #investigation #crime #disrespectful #nyc #abc7ny @abc7ny pic.twitter.com/xrqQQkbIYm

The NYPD also told its police officers they "are not expected to tolerate" having water thrown on them, after the viral videos surfaced of the incidents.

On Wednesday afternoon, the Sergeants Benevolent Association released another video of NYPD officers being doused with water.

NYPD Cops are in DANGER! Another video of water buckets being tossed. O’Neill needs to go before we get another cop killed! TERRENCE where’s the Arrest. No more tough talking, stop blaming the cops if you can’t handle the job perhaps you and O’Neill should find new work! pic.twitter.com/Nl8PqUE8Zc

In an internal message to the rank and file, the department told officers that such behavior would almost never rise to a crime. But interfering with police work is a crime.

The officers were told that charges available to them would include obstructing government administration, criminal tampering, harassment or disorderly conduct.

If the officer's uniform was damaged, criminal mischief would be applicable. If an officer is injured by a water spray or a thrown object, the attacker could be charged with felony assault.

At a police event Tuesday, NYPD Chief of Department Terence Monahan drew a sharp distinction between the incidents. He described one as a potential assault on an officer doing his duty and the other as a failure of officers to respond to a clear provocation.

"Someone thought it was all right and take a bucket of water and toss it over a cop's head," Monahan said of the Brooklyn incident. "That's not all right. Any cop who thinks that's all right, that they can walk away from something like that, maybe should consider whether or not that this is the profession for them."

Ed Mullins, president of the Sergeants Benevolent Association, said there's worry that the liquids in the buckets "could just as easily have been bleach, gasoline, or some other toxic substance."

The police union released a statement saying, "Our anti-cop lawmakers have gotten their wish. The NYPD is now frozen. It's the end result of the torrent of bad policies and anti-police rhetoric that has been streaming out of City Hall for years now."